A Tribute to Mayor Omar Ahmad, a Real Muslim-American Leader

Editor's Note: We lost a real Muslim-American leader this week, and Muslims across the country are in mourning today. Omar Ahmad, mayor of San Carlos, California, died of a massive heart attack on Tuesday. Ahmed was one of those men who defied all descriptions, and yet I'll try to find the words to describe him: an optimist, a consummate public servant, a successful entrepreneur, a geek at heart, an adventure seeker, a cigar aficionado, a visionary who truly lived a life that was American and Muslim, a man who said that we shouldn't group people as Muslims or non-Muslims, but rather as Muslims and neighbors. His loss is felt by so many who knew him or just knew about him.

A week and a half ago, President Barack Obama, after announcing that Osama bin Laden had been killed, went on to say the words that filled my heart with such emotion—that bin Laden had never been a Muslim leader and that this country's war never was nor ever will be against Islam. The President spoke the truth. And to all the naysayers and other right-wing pundits who continue to insist that Muslim-Americans are not a legitimate part of the American fabric, that we cannot be Muslim and American, that we are not a vital part of what is good about this country, I give you the example of Omar Ahmad.

Shahed Amanullah, the founder of altmuslim.com and a dear friend of Ahmad, wrote the following tribute to his friend Tuesday night on a flight to San Francisco, as he rushed to get to the jannaza namaz (funeral prayers) and funeral for Ahmad, saying, "Omar, you did it all, and you made it seem so easy." 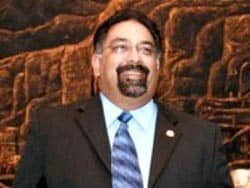 In 2007, Silicon Valley entrepreneur Omar Ahmad had decided to take a stab at politics after working at a string of successful high-tech startups and companies. While charging up the San Carlos, California hills on his trusty Segway meeting potential voters, he came across a woman who struck up a conversation with him. After finding out about his Islamic faith, she replied that she could never vote for him because she didn't trust Muslims. Rather than take offense at the remark, Omar replied with his characteristic optimism that she should visit his website anyway and read about his positions.

His reaction left an impact on the woman, who sometime soon after approached him as he handed out flyers in front of the San Carlos CalTrain station. She told him that she had read his site, was impressed at his passion for improving the city, and promptly proceeded to join him in handing out flyers. Later, when Omar was elected to the San Carlos city council, she joined him at his victory party, and Omar would soon move on to serve as that city's mayor, as well as a board member of CalTrain and SamTrans, two regional mass transit districts.

As the mayor of San Carlos and a public servant in general, Omar put in as much energy as he did with his various startups, and he didn't stop until his body finally gave out. Omar Ahmad passed away suddenly on the morning of Tuesday, May 10th of a massive heart attack, after having worked late into the previous night serving his constituents at a city council meeting.

It is one thing to be a successful entrepreneur, as Omar was. He spent five years at the Discovery Channel helping to build its most signature programs and properties before feeling the lure of Silicon Valley just as the first dot-com boom started. He spent time at @Home, Grand Central (now Google Voice) and Netscape before moving on to serve as CTO of Napster, where he was the one who pulled the plug on the famed music-sharing network when the courts decided that it was time for it to go. He co-founded and/or served as CEO of a string of other startups—TrustedID, Logictier, and the ambitious SynCH Energy, which aimed to convert greenhouse gases from sewage treatment plants into unleaded fuel that you can put right in your car.

It's another thing entirely to devote that same passion toward your personal and philanthropic life. Omar went out of his way to serve the people around him in multiple ways, whether it was tutoring kids at science camps, giving TED talks (in this one, he talks about how to influence elected officials), and serving in leadership positions in community organizations (he served as director of the visionary Muslim organization AMILA). Before his untimely passing, he was working with me to bring one of his biggest dreams to life: a $5 million venture philanthropy fund driven by Islamic charitable values.