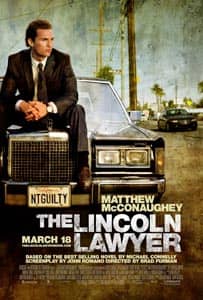 They set a net for my steps;
my soul was bowed down.
They dug a pit in my path,
but they have fallen into it themselves. ~ Psalm 57:6

Warning: About a third of the way into the film there is a revelation discussed in this review, so do not read this if you want to see the film without knowing this.

When I first heard of this film, I wondered if it were about our Civil War President. Not so, of course. In this work directed by Brad Fruman, Mick Haller (Matthew McConaughey) is a scheming Los Angeles criminal defense attorney whose office is the back seat of a Lincoln Continental sedan. Because of Mick's drunk driving conviction, a driver takes the lawyer around as he collects his fees and makes deals with the denizens of the streets.

A legal bottom-feeder, Mick is a wheeler-dealer who knows his way around the criminal justice system and is well aware of the sins of his clients, virtually all of whom are guilty. Reputable attorneys want nothing to do with them (or him), even though most of these petty criminals have access to money, hence their reliance on Mick when they are in trouble with the law. The police despise him, but Mick is so adept at his profession that he is able to have the last laugh -- is able, by hook and by crook, to get most of his clients freed. His license plate, which reads "NTGUILTY," is his way of thumbing his nose at his many detractors.

And yet, as we soon see, even Mick retains a sense of fairness in regard to the law, and he is wracked with guilt over his failure to win the case of his one client who really was innocent -- Jesus Martinez (Michael Pena) has been in prison for a number of years for a crime he did not commit. Val Valenzuela (John Leguizamo), a shady bail bondsman, approaches Mick concerning a rich potential client. Louis Roulet (Ryan Phillippe) is accused of viciously beating a bar girl who also moonlights as a prostitute. Louis is adamant that he is innocent, maintaining that the girl's wounds were either self-afflicted or caused by others as part of a plot to extract a large settlement from him.

The family lawyer accompanies Louis, in the tow of his domineering mother, so Mick should be a bit suspicious as to why they need him. However, any doubt he might have had is overshadowed by the huge fee they offer him. Mick's doubts are revived as his P.I., Frank Levin, who is also his best friend and so well portrayed by a walrus-mustached William H. Macy, digs deeper into the troubled past of the spoiled rich kid, including the possible killing of another call girl several years back.

Confronted by so much damning evidence, Louis admits to Mick his guilt, as he taunts him, "What can you do about it?" For the first time in his life Mick wants to lose a case, but he is bound by the code of his profession so that he cannot reveal to the police his client's guilt, nor can he slack off in defending him in court. (Usually in film it is a priest facing such a dilemma.)

The plot at this point reminds me a little of a wonderful Jimmy Stewart film in which he plays a lawyer believing in the innocence of a client and mounts a brilliant defense that wins her a "Not guilty" decision. In Anatomy of a Murder, Stewart's lawyer discovers only after he and the client are leaving the courthouse that the woman actually is guilty. She disappears without even paying him.

In The Lincoln Lawyer it is less than midway into the trial that Mick knows his client is guilty (though even here there is a twist at the end). Mick's dilemma thus becomes how can he defend his spoiled rich kid client and somehow get the truth out, he being bound to silence by the lawyer-client rule? His efforts in and out of court lead the detective who despises him to comment, "You got one client in jail for what one other client did." He then asks, "Whose side are you on?" This film asserts that even a person as venal as Mick has a spot of decency left in him.

This might be why his ex-wife Maggie (Marisa Tomei) still likes and lends him her support, even though she is on the other side as a prosecuting attorney -- that and the fact that it is important for their young daughter Hayley that they get along. Those who like courtroom drama and a hard-boiled mystery story should enjoy this competently made film that suggests that despite everything, including venal lawyers and lying witnesses, justice does somehow win out in the end.

Truthful lips endure forever,
but a lying tongue lasts only a moment.
Deceit is in the mind of those who plan evil,
but those who counsel peace have joy. ~ Proverbs 12:19-20