Fr. Shawn Ratigan: Catching a Creep in the Circle of Grace 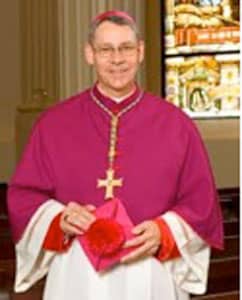 Fr. Shawn Ratigan, pastor of St. Patrick's, an elementary school in the diocese of Kansas City-St. Joseph, must have presented parents and faculty with a Hitchcockian conundrum. His behavior toward children was clearly creepy. Here, I'm borrowing the word of an eighth-grade girl—who sensibly rejected his Facebook friendship request—because, really, there's none better. Ratigan encouraged children to sit on his lap and dig in his pockets for candy. He photographed them constantly—even, observers noted, when they weren't doing anything especially photogenic. He coaxed one boy into his office; when asked why, the boy explained, "He said he wanted to show me something."

Creepy is one thing. The question remained: was Ratigan's behavior criminal? Based on the evidence available at the time, nobody could have said in good conscience that it was.

Anyone who's followed Michael Jackson's career should know the drill. Some adult displays an attitude toward children that's plainly abnormal. With cunning, good luck, or even a modicum of self-control, he manages to deny the world proof that his abnormality has reached actionable proportions. Short of seizing torch and pitchfork, onlookers have no choice but to watch and wait.

It was in the watching and the waiting that the staff and parents of St. Patrick's transformed passivity into activity. They compared notes on Ratigan's behavior, corroborated one another's impressions, and checked those against expert opinion. Thanks to their vigilance, Julie Hess, St. Patrick's principal, was able to fuse a mosaic of apparent non-events into a coherent picture of pathology. In May of 2010, she reproduced this picture in a 28-paragraph report (pdf), which she sent off to the diocese.

The story has been in the national media for a couple of weeks already, and the bulk of the attention has gone to the response of Bishop Robert Finn. Ignoring Hess's report, he sat on a summary given him by Msgr. Robert Murphy, his Vicar General, until several months later, when he learned that Ratigan possessed pornographic images of children. Even then, he declined to inform police for several more months until Ratigan violated his orders by consorting with minors. By pre-2002 standards, it was a B+ performance; by today's, a D.

But boos for Finn should not, I don't think, drown out the applause due the other actors in this drama. Watchdogging Ratigan can't have been an easy task. To the very end, he had his supporters. He had served as a spokesman for the Catholic Boy Scouts. Even after he'd been removed as pastor of St. Patrick's, at least one set of parents requested his presence at their child's birthday party.

Facing criticism, Ratigan could be highly manipulative. When a teacher tried to interpose herself between Fr. Ratigan and a fifth-grade girl, he complained to her colleague about being undeservingly suspected by "a teacher who's not even Catholic." Yes, that's right—he played the closest thing he had to the race card.

That quote from Ratigan makes up just one line in Hess's report, but it points, I think, toward an even thicker bramble bush. According to National Catholic Reporter, Finn's recent elevation as bishop of Kansas City-St. Joseph preceded an "extreme makeover" for the diocese. This included not only a grand personnel shake-up but a shift in emphasis from "social engagement and lay empowerment" to "Catholic identity and evangelization." With fault lines visible, Fr. Ratigan might have thought he'd picked a better time to complain about being ganged up on.

In fact, it has become popular in certain Catholic circles to brand the whole notion of endemic sex abuse as a Big Lie. In Crisis Magazine, Rev. Robert Orsi disparages the 2002 Charter for the Protection of Children and Young People, claiming its "one-size-fits-all approach" to allegations of abuse has "left every innocent priest vulnerable to defamation and dismissal from the ministry." In support of that statement, Orsi cites "a retired FBI agent" who had worked with him, investigating abuse charges, to the effect that "about ONE-HALF of the claims made in the Clergy Cases were either entirely false or so greatly exaggerated."