On Gay Marriage: Rights and Consequences

June 27, 2011 by Tim Muldoon
"Like" the Patheos Catholic Page on Facebook to receive today's best commentary on Catholic issues. 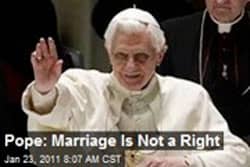 At the root of contemporary law in the United States (and more generally the West) is a doctrine of rights that has become practically meaningless. This point had been simmering for some time, until this past week when I saw a massive McDonald's billboard that proclaimed "chocolate drizzle is a right." I don't blame them; they are only using the idea of rights that's been thrown around in recent years: a right is something you really, really want, and it would be mean to deny it.

The only way that a right can make sense is if a community carefully discerns its meaning over history, and carefully distinguishes that meaning in law. There are dreadful consequences to a society if it gets rights wrong: they lose the force of argument that safeguards social goods.

Consider the right to free speech: carefully discerned, it advances goods like critiquing the excesses of a corrupt government, promoting open dialogue about contentious moral problems, and protecting scholars and jurists who navigate careful arguments in courts of law. Without such discernment, there would be plenty of imminently lawless hate speech without fear of punishment (think of the Ku Klux Klan); lying in the courtroom and on the congressional floor; false advertising; political calumny. It would create mayhem, and virtually all forms of public communication would become rather meaningless.

An analogous argument applies to marriage. It took the Church and the nations of the West about thirteen centuries to get the legal definition of marriage right, but it's taken only a few decades to change course. No longer do we think of marriage as a healing of the two halves of the human family, and a call (especially to predatory men) to social responsibility to benefit women and ensure the welfare of children. We have come to think of marriage as a sexual relationship we really want. It is no wonder that according to the Centers for Disease Control, fewer people are marrying: the bar is extremely low.

In two earlier essays (here and here) I argued that Christians should promote a view of marriage that has evolved over these centuries of reflection, yet I suggested that our promotion of this view should be moral and spiritual rather than legal, to avoid causing hurt to our friends and family who seek out gay relationships. But that was a false dichotomy, and I am thankful to commentators (examples here and here) who elucidated why legal argument must be part of that public witness.

In short, if Christians are to be part of a culture, rather than removed from it in a kind of ghetto, it is our responsibility to help shape laws that promote the common good. We must do it with the careful discernment and love that characterized Jesus' attitude toward all: generosity and compassion, rooted in the truth of who God has called us to be as individuals and communities, not naming the speck in our neighbor's eye without first removing the plank in our own.

The common good in matters of marriage is fundamentally not about the rights of adults, but rather about the goods that accrue in a society that protects the welfare of mothers, fathers, and children. The tenor of the argument about gay marriage in New York and elsewhere misrepresents both the notion of rights and the notion of marriage, and both misrepresentations will have negative effects for our culture. Christians and others who therefore share a commitment to a robust and meaningful understanding of rights must therefore be part of the legal argument about gay marriage. But we must do it by first naming how we ourselves have gotten marriage wrong, through callous participation in the toxic contemporary sexual zeitgeist.

First, rights. No one has a right to a state-invented declaration of marriage. Only a weak understanding of rights can found a claim of a "right" to marry in this sense. Such a claim proposes that states can decide on the kinds of relationships to which they will give legal recognition. Yesterday, it was between men and women; today, it could be between women or between men; tomorrow, it could be between grandmothers and grandsons or between managers and secretaries.