A common theme in Judaism is the struggle for one's heart. So much so, that the Talmud declares that it is one's heart that God "wants."

Often this struggle can be seen as a tug-of-war between one's head and one's body—one's mind and one's lusts, in which the heart, one's passion, is at stake. If the head is triumphant, rational decisions are made and followed up with a passion. However, if the body is victorious, an impassioned chasing after one's lusts ensues.

Rising Above
For this reason, when we are involved in activities of holiness within Judaism, we stay away from any grossly physical situation because, while we want to be involved in elevating the physical, we want to avoid becoming engrossed in the physical.

As discussed previously in regard to that which is permitted and that which is forbidden in Jewish law, this is the basis of the Torah.

When it is possible to bring about God-clarity through a physical act, that act is permitted. When something is too enveloped in non-God-clarity to reveal God in the act, it is forbidden.

In the Messianic era, there will be a change in that which is forbidden since our level of consciousness will shift. For example, the pig will become permissible to eat, as is hinted to by the Hebrew word for pig, chazir, which shares it root with the word for return, chozer, indicating that the pig will return to its proper "place" as an aspect of the physical world by which the Divine can be actively perceived, and, thus, the pig will be rendered kosher.

(It should be noted that we are not saying here that Judaism will change when the Messianic era arrives. Rather, we are saying that built into the system of Judaism is the possibility for something to go from forbidden to permitted and visa-versa based on the spiritual conditions.)

However, for now, we are to live and function in the unclear reality in which we exist.

The answer to this is that while it is true that all that occurs is truly good, we simply do not function on the plane to naturally and initially react to a difficult or painful occurrence in a way that reflects its inherent goodness. That is just simply not our headspace.

However, the Talmud teaches that when the Messianic era arrives, there will only be the one blessing for good occurrences—the blessing for good occurrences that appear good. In this blessing we refer to God as "The One Who Is Good and Does Good" since the clarity and consciousness of that time will be one in which all will be initially perceived as good and from God. There will be no discussion necessary in order to come to this conclusion. There will be no philosophizing. It will not be something we know; it will be the reality we live and breathe.

Finding Clarity amidst Confusion
Just as we are presently engrossed in our unclear spiritual state of mind, resulting in naturally perceiving certain events in our lives as bad, there are certain situations that are so affiliated with, and engrossed in, the physicality of our world that it would be inappropriate and detrimental to be involved in holiness and spirituality within those surroundings and under those conditions.

For this reason, according to Jewish law, one is not to pray nor be involved with any holy activity in the bathroom, next to bathroom waste, near a garbage dump, in a place that smells badly, etc. Nor is one permitted to pray when one has to go to the bathroom.

Additionally, one is not to pray naked, nor in front of the nudity of another.

(The term "nudity" requires definition. Judaism understands there to be two forms of nudity—Objective Nudity and Subjective Nudity. Objective Nudity is that which Judaism considers as nudity irrespective of what the societal or communal norms are. Subjective Nudity is anything additional that is normally covered within a particular community. To get more specific on this topic would be to go beyond the scope of this article.)

This is not to absolutely equate the human body with the bathroom or waste material. Rather, since we initially identify both the body and waste as staples of pure physicality, we are to distance ourselves from them as we attempt to ascend beyond the engrossing nature of the physical to achieve holiness. 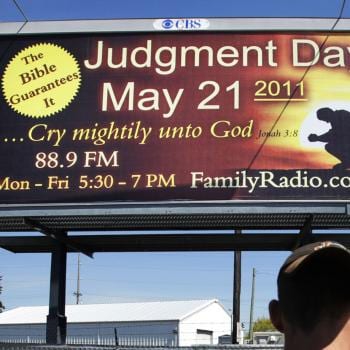 Anointed for Burial
Frank Viola
Get Patheos Newsletters
Get the latest from Patheos by signing up for our newsletters. Try our 3 most popular, or select from our huge collection of unique and thought-provoking newsletters.
From time to time you will also receive Special Offers from our partners that help us make this content free for you. You can opt out of these offers at any time.
see our full list of newsletters
Editor's picks See all columnists