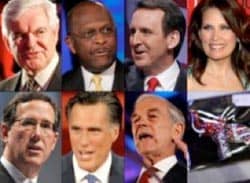 First, in an interview with Glenn Beck, former Godfather Pizza CEO Herman Cain, a Republican candidate for president, said he would want Muslim Americans to take a loyalty test if they were to be part of his cabinet. He reiterated his stance Monday night in the New Hampshire presidential debate, the first for the 2012 election, saying that he would ask Muslims seeking jobs in his administration "certain questions . . . to make sure that we have people committed to the Constitution."

Former House Speaker and now presidential candidate Newt Gingrich agreed with him, saying, "Now, I just want to go out on a limb here. I'm in favor of saying to people, 'If you're not prepared to be loyal to the United States, you will not serve in my administration, period.'"

I want to pause a minute—as the blather and rhetoric and finger-pointing continue to ramp up in these months prior to the 2012 presidential election—and reflect on what these presidential candidates are suggesting: That a certain group of people who are a part of American society must prove their loyalty to the United States before serving in public office.

Think about that for a minute.

This goes beyond making American Muslims a general negative issue in the upcoming presidential election, or beyond the ridiculous hype being built over shariah law taking over this country. This is a suggestion by presidential candidates who are out speaking in a very public forum that a certain population of America must endure loyalty tests to prove their worth as Americans and their support for the constitution.

I find it beyond belief that in this country, where freedom of speech and freedom of religion are two sacred founding American principles, that two presidential candidates are suggesting that some Americans must prove their loyalty simply because they practice a particular faith. Since when has a public declaration of constitutional loyalty ever been the ticket one must buy for being American?

To be sure, elected public officials are asked to uphold and defend the Constitution of the United States, and of course any future president would want to make sure that the members of his or her cabinet are firm supporters of this quintessential American document. After all, our country was founded upon this document, and it allows us the very freedoms to say what we want and believe in what we want, among many other things.

The incredible thing about this idea of making American Muslims take some sort of loyalty oath is that Cain feels it is not bigoted to apply this only to Muslims. In a question asked of him at the presidential debate about why he would single out Muslims, Cain responded, "It is not bigoted, it is called being careful and cautious." But if you look at the Constitution itself, Article VI says this:

The Senators and Representatives before mentioned, and the Members of several State Legislatures, and all executive and judicial Officers, both of the United States and of the several States, shall be bound by Oath or Affirmation, to support this Constitution; but no religious test shall ever be required as a qualification to any office or public trust under the United States.(emphasis added)

But the problem I have is when candidates like Cain and Gingrich single out a group of Americans and say they need to be questioned, they need to prove their loyalty more, and essentially, they are not to be trusted.

Today Muslims are in the hotspot for reasons fair and unfair. During World War II, it was Japanese Americans, for reasons fair and unfair, whose loyalty was questioned. And let's not forget the era of McCarthyism. Is this where we are again? Have we not learned anything? That there are so-called Muslims in the world with the intent to inflict harm, who are against the United States—I am not questioning that.

I am questioning the suggestion by powerful men running for the presidency of the United States that based on the actions of some, all members of a particular faith will have to prove their loyalty to this country. Herman Cain and Newt Gingrich say they want Muslims to prove their loyalty if they are to serve the government, but I wouldn't be surprised if they felt that way about all American Muslims.

I recently interviewed Zahra Suratwala, the co-editor of I Speak for Myself, an anthology of forty American Muslim women speaking about their faith and their experiences living in the United States. I asked her what she would say to those who declare that Muslims cannot be American at the same time, because their loyalty is to their faith, not their country.