June 22, 2011 by Pat Gohn
"Like" the Patheos Catholic Page on Facebook to receive today's best commentary on Catholic issues. 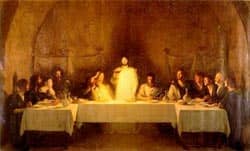 In the encyclical, Ecclesia de Eucharistia, Blessed John Paul II sought to rekindle in Catholics our Eucharistic amazement: "to contemplate the face of Christ" anew, and to receive Christ in the most intimate way possible this side of heaven.

When it was released in 2003, I wondered if Ecclesia de Eucharistia ("On the Eucharist in its Relationship to the Church") would be his last encyclical. In frail health from advancing Parkinson's disease, I marveled at both the unrelenting schedule and prolific output that came from John Paul II. Yet, here it was, his fourteenth encyclical. From my vantage point, the Holy Eucharist empowered and animated the ailing pope.

Blessed John Paul II not only taught the Second Vatican Council proclamation that the Eucharist is "the source and summit of the Christian life" (Lumen Gentium, 11), he witnessed to it in his heroic person.

The Catholic Church celebrates Corpus Christi Sunday this coming week, the Solemnity of the Most Holy Body and Blood of Jesus. This is a prime opportunity to examine our own relationship with the Eucharist in the microcosm of our lives—to draw our very lifeblood from Christ in the Eucharist.

(What follows are some excerpts from the introduction and first chapter of John Paul's final encyclical on the Eucharist. Next week's column will explore John Paul's counsel on growing in Eucharistic devotion via "the school of Mary, woman of the Eucharist.")

In the Eucharist, we see and find and receive Jesus. Recall the disciples along the road to Emmaus in the post-Resurrection accounts. Their amazement and joy at discovering Jesus alive—in the context of their daily lives—was uncontained.

To contemplate Christ involves being able to recognize him wherever he manifests himself, in his many forms of presence, but above all in the living sacrament of his body and his blood. The Church draws her life from Christ in the Eucharist; by him she is fed and by him she is enlightened . . .

Whenever the Church celebrates the Eucharist, the faithful can in some way relive the experience of the two disciples on the road to Emmaus: "their eyes were opened and they recognized him" (Lk. 24:31). (Ecclesia de Eucharistia, par. 6)

John Paul's encyclical called us to think bigger. To pray, one might say, with holy awe and astonishment of what is happening at the Eucharistic meal besides our own personal moment with the living Christ.

John Paul II draws back the veil on the Eucharistic sacrifice, revealing a simultaneous macrocosm of the unparalleled majesty of the Eucharist's salvific power for the sake of the world.

[T]he Eucharist has given me a powerful experience of its universal and, so to speak, cosmic character. Yes, cosmic! Because even when it is celebrated on the humble altar of a country church, the Eucharist is always in some way celebrated on the altar of the world. It unites heaven and earth. It embraces and permeates all creation. The Son of God became man in order to restore all creation, in one supreme act of praise, to the One who made it from nothing. He, the Eternal High Priest who by the blood of his Cross entered the eternal sanctuary, thus gives back to the Creator and Father all creation redeemed. He does so through the priestly ministry of the Church, to the glory of the Most Holy Trinity . . .

The Eucharist, as Christ's saving presence in the community of the faithful and its spiritual food, is the most precious possession which the Church can have in her journey through history. (Ecclesia de Eucharistia, par. 8-9)

The Eucharist transcends our present reality, catching us up into its transcendence. As we receive the Host and the Precious Blood, we are not just within one moment in time, we are in THE MOMENT that defines everything humanity longs for: We are there with the Lord Jesus in his redemptive sacrifice on the Cross.

In my mind's eye, I envision Jesus' loving outstretched arms from the Cross reaching from the dawn of Creation, all the way to the culmination of the end of the world and its recapitulation in the New Creation. Jesus offers it all, everything and everyone, back to the Father in one holy unrepeatable moment of epic proportions.