Sorrow Neither Sweet Nor Fitting 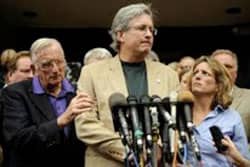 They were held hostage—all four of them, members of the Petit family, late July 2007, in their suburban Connecticut home. Dr. William Petit, Jr., his wife Jennifer, and their two daughters, 17 year-old Haley and 11 year-old Michaela.

The captors split them apart: Jennifer, Hayley, and Michaela confined upstairs; Dr. Petit, blood gushing from his head, alone and half-destroyed in the basement.

Long after that night, Dr. Petit would tell a courtroom that he and his family had fallen asleep "after a very nice day—church, golf, and a fun and happy family dinner . . . ."

He would awake, he said, to a "confused terror."

The terror began after two long-time criminals, Steven Hayes and Joshua Komisarjevsky, broke into the Petit home. After finding Dr. Petit, they battered him with a baseball bat, bound his hand and feet, and dumped him in the bottom of the home. They raped Mrs. Petit and 11 year-old Michaela.

When morning arrived, Hayes and Komisarjevsky drove Mrs. Petit to the bank and forced her to withdraw $15,000. After returning to the home, they strangled Mrs. Petit, tied Hayley and Michaela to their beds, poured gasoline on their bodies, and set the house on fire. Hayley and Michaela passed out from smoke inhalation before being touched by the inferno. Dr. Petit, crippled and unsteady from the baseball bat, dragged himself out of the basement shortly before his family's home became a forest of flame.

Police captured Hayes and Komisarjevsky as they were fleeing the home.

In December of 2010, as jurors considered whether to give Hayes the death penalty, Dr. Petit presented his victim impact statement to the court. It began: "The impact of these crimes against our family was and is like a bomb going off in your house. It is nearly impossible to describe as it so completely shattered my life and the lives of thousands of others." He continued:

As many of you may suspect, I seriously considered suicide many times—no wife, no children, no home and no interest in life in general. . . . But truly, less of the emotional damage is due to what happened to me; it is from what happened to my family. My wife was raped and strangled in her own home after she had complied with the intruders' wishes. Hayley and Michaela died alone, burned alive and asphyxiated in the sanctuaries of their own bedrooms in the only home they had ever known.

I read the part about Christmas trees last December. I had recently taught a Confirmation class during which I told my students the meaning of the Christmas tree. The tree, I said, represents the new life given by Christ, and the lights on the tree represent Christ as the light of the world. Together, we read a verse from the Gospel of John: "[T]his life was the light of the human race . . . and the darkness has not overcome it." With Christ, I confidently said, light triumphs over darkness. Good wins. Truth wins.

In that moment, in the safe and plain room of a typical parish, I was pleased with myself and felt secure and assured. I had succinctly unfolded the meaning of Christmas and the Incarnation. The world was ordered, cared for, redeemed.

Good night, everybody. See you next class.

When a few days later I read of the aftershocks on the Petit family, it came to me as a rebuke. I felt exposed, like a charlatan street preacher or the callow "friend" of Wilfred Owen's "Dulce et decorum est." Somewhere an accusation formed, a voice whispered, "Do you really believe that—the part about light triumphing over darkness? Is that what you'd tell the Petits?"

For the past six months, I have thought often about that day—and about Dr. Petit, and about Christmases without Christmas trees. I teach at an institution whose unofficial motto, invoked often, is that "God is always already at work in our lives." I tell my students that God loves them, watches over them, has a plan for them. Everyone is made, I tell them, imago dei: in the image and likeness of God.

But when my thoughts drift to the Petits and to their holocaust, my certainties vanish. The darkness has not overcome it—right? Deus caritas est—right? Propositions that sustain my soul, and which I optimistically impart to my students, lose their obviousness. In these moments, hungry for answers and for a return to certitude, I turn to books and old lecture notes and recall discussions with minds more intelligent than my own. I think of martyrs and of a grieving Christ forced to contemplate scenes of his imminent crucifixion.