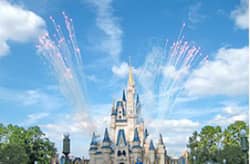 Disney Princesses
So there I was in the largest Disney retail store in the world at the Downtown Disney complex at Disney World surrounded by all things Disney (and if that seems like a whole lot of Disney, then people, you have never been here; it is Disney to the max!). The store was packed with people buying Disney Princess items (like me, for my beloved's little girls, not for myself), with little girls getting Princess makeovers at the Bibbidi Bobbidi Boutique (I'm not making this up), with grown-ups buying Disney-themed clothing, with kids rummaging through Disney chocolates, stuffed toys, key chains, etc., etc., etc.

And this was just one tiny corner of the Disney enterprise in Orlando, of course. At the precise moment I was picking out identical lavender Princess nightshirts in the World of Disney, the Disney World parks (all four major theme parks and presumably the water parks and the golf course and the resorts and all the subsidiary enterprises) were filled with over a hundred thousand people, and tens of thousands more were landing at Orlando International Airport, or arriving by car, or even chugging into town thanks to Amtrak's only car train.

Now, on the one hand I could portray the appalled cultural critic: Princess makeovers, rampant consumerism, magic packaged as product? Harrumph, I say! Off with their heads! (I wouldn't even be the only faith and culture writer just now slamming Disney Princesses, since Allen Yeh posted a lovely piece at Scriptorium on just that last Thursday.)

But, on the other hand, I am also a consumer who has experienced something magical in this product. Last summer, for example, on my son Chandler's first trip to Disney World, I played cynical grownup—until we walked into the Magic Kingdom and I saw the smile on his face, and saw the Cinderella Castle, and realized: Holy cow! We're in Disney World!

There is certainly something here, some spiritual or emotional something that explains why people travel here from all over the world, why they stand in line, why they endure heat and downpour and crowds, why this has become a destination worthy of pilgrimage. As my friend Mark Pinsky did in his book The Gospel according to Disney: Faith, Trust, and Pixie Dust, I want to argue that we can find spiritual lessons on vacation that might inform our everyday lives. And so I'm going to set aside all the negative things I might say about what's spiritually wrong with Disney World, and see if I can suggest some things we might learn from this place.

Immersion in the Moment
Every moment of a Disney guest's experience within a park, every angle of vision has been thoughtfully considered by Disney's "Imagineers." Whether you're in line or walking down a street or on an attraction, the Disney idea is to immerse you in the moment so that you forget how your feet hurt, you forget how tired you are, you don't think about how long it will be before you get to the end of the line. Everything is designed to keep you grounded so that you enjoy and experience where you are now.

Take Expedition Everest, in the Animal Kingdom park queue, which passes through a temple, a museum, a Himalayan shop. Everywhere you look you'll see carvings, trinkets, testimonial letters, exhibits—all designed to engage your attention completely. The Disney design aesthetic of attractions (violated, so far as I know only once and only briefly, when the elevator doors of the Tower of Terror open and you momentarily see Disney Hollywood spread out before you) roots you solidly in a single place. You are invited to give your complete attention—and rewarded when you do so.