To Not Stay Silent in the Face of Evil 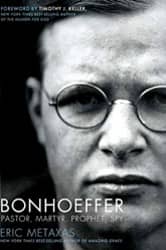 Would you have had the courage to speak out against the Nazis if you lived in Germany during the 1930s and '40s? Dietrich Bonhoeffer did, and his life is the subject of a riveting biography that we were pleased to honor with a Christopher Award.

Written by Eric Metaxas, Bonhoeffer: Pastor, Martyr, Prophet, Spy shines a light on the young Lutheran pastor who saw that his fellow German Christians had fallen prey to a concept he called "cheap grace"—the idea that you could be authentically Christian without being willing to suffer hardship and even death to live out the gospel. When the Nazis introduced laws that isolated and eventually persecuted Jews—even those who had converted to Christianity—because their blood was not "racially pure" in German terms, Bonhoeffer knew this contradicted every fundamental doctrine in which the church believed. Yet many Germans went along with it, partially out of a misguided sense of patriotism, but also because expressing a different opinion was dangerous.

They believed God loved them and forgave them no matter what, so their actions and choices didn't really matter. Bonhoeffer saw this as a distortion of the Protestant belief that we are saved by faith alone. He contended genuine faith would inform a person's actions and completely change the way they live. It also meant that Christians had a universal responsibility to suffer with those who suffer, to stand up for those who are being unfairly persecuted even if they belong to a different race or religion.

Interestingly, Bonhoeffer's ideas about Christian responsibility were partially formed by his experiences with Catholicism. Keep in mind, this is long before interfaith dialogue became popular, so the fact that Bonhoeffer was open-minded enough to appreciate and embrace certain elements of the Catholic faith made him a man ahead of his time. The specific instance when it happened was during a trip to Rome when he attended a Mass at St. Peter's. The Mass, which benefited from an angelic sounding choir, was being celebrated by a cardinal surrounded by numerous other clergy from around the world.

Bonhoeffer wrote this about the scene:

The universality of the church was illustrated in a marvelously effective manner. White, black, yellow members of religious orders—everyone was in clerical robes united under the church. It truly seems ideal.

Bonhoeffer realized there were certain truths and doctrines that transcended denominational differences and linked all Christians together. Author Eric Metaxas elaborates,

The glimpse of the church as something beyond the Lutheran Protestant Church of Germany, as a universal Christian community, was a revelation . . .The idea of a church defined by racial identity and blood—which the Nazis would push and so many Germans tragically embrace—was anathema to the idea of the universal church. So it was on this Palm Sunday in Rome that Bonhoeffer's course was set in motion.

Bonhoeffer was eventually executed for his role in a plot to overthrow Hitler. Yet he faced his death peacefully because he had accepted it as the cost of true Christian discipleship.

Metaxas' biography is so multi-faceted and epic that the small portion I've written about here can't do it justice. It also addresses the relationship between church and state, the treatment of the disabled by the Nazis, the work of the numerous good Germans who opposed Hitler, and much more. Bonhoeffer is a book that needs to be read, contemplated, and absorbed. Don't miss this timeless and relevant profile in courage that reminds us, in Bonhoeffer's own words, "Silence in the face of evil is itself evil. God will not hold us guiltless."