Touched by Christ's Spirit: A Meditation on Pentecost

Acts 10:1-18
I am so hungry. I think, while lunch is being prepared, I will go up on the roof and pray. The smell of food cooking is too much for me, and I must not be impolite and grab some of the meat off the spit. I am a guest in this home, after all and must have good manners. Whenever I pray I run through in my mind the ways I disappointed Jesus and beg his forgiveness.

I felt like such a fool, after protesting that I would never betray him, falling asleep while he was suffering in prayer in the Garden of Gethsemane, and then betraying him three times before the cock crowed that it was morning.

But he forgave me, and insisted that I feed his sheep, asking if I loved him, and I promised that I did and that I would. I'll follow the rules from now on—and if I do, then surely I'll please Jesus. Surely the good news of Jesus is for those who will observe the dietary and ritual laws of Jews. Gentiles are profane and unclean. Jews are not to associate with them, much less to convert them to our movement! If people are going to become Christians, their men must first be circumcised and everyone must observe the dietary and ritual laws and feast days of Judaism.

Paul thinks it's not necessary, but he's like all converts, going from one extreme to the other. Since he used to be a Pharisee, now he has no use for them. But I disagree. We need to teach new converts to observe these dietary and ritual laws. If we allow people to join without following these practices, then what requirements do we have left—except to repent, accept God's forgiveness in Christ, and ask for faith to love him more?

Paul says that's enough. Could he be right? Could I be just as blind as he was for three days and nights—limiting the good news? I'm so hungry I wish they'd call up that lunch is ready. I can't even think straight anymore—Lord, clear my head, and open my heart to your will! I am so hungry. I feel so tired. I think I'll just sleep for awhile.

Peter's vision was interrupted by the arrival of the three men sent by Cornelius. He went with them, and God opened his heart and mind so that he proclaimed, "I truly understand that God shows no partiality, but in every nation anyone who fears him and does what is right is acceptable to him" (Acts 10:34). And while Peter was still speaking, the Holy Spirit fell upon all who heard the word (Acts 10:44). And Peter said, "Can anyone withhold the water for baptizing these people who have received the Holy Spirit just as we have? So he ordered them to be baptized in the name of Jesus Christ" (Acts 10:47-48).

Phoebe:
From Silence to Bold Speech
Romans 16:1-16
My name is Phoebe, and I am a deacon in the Church of Jesus Christ at Cenchreae, the port across the isthmus from Corinth. Even though I am a woman, I hold a position of responsibility and influence in the church. Many women in our movement are deacons—a role we fill with diligence, joy, and humility. I am traveling to Rome, leading a group of church folks to present this letter from Paul to the Church at Rome.

Listen to the confidence Paul has in me: "I commend to you our sister Phoebe, a deacon of the church at Cenchreae, so that you may welcome her in the Lord as is fitting for the saints, and help her in whatever she may require from you, for she has been a benefactor of many and of myself as well" (Rom. 16:1, 2).

When he first got to Cenchreae, Paul saw how others looked to me for leadership in the worship and service of our community. He was not used to meeting women who had authority that didn't come from his assigning it to them. I could tell this bothered him, and I knew why—for in some of his other letters he expresses the belief that women should not have leadership outside the home, nor should they speak in public worship.

Then he saw that I used my influence wisely to build up Christ's body, to promote harmony and service to the sick, and he grew to appreciate my efforts as I did his. There were times when I would accuse him of being heavy handed and he would say, with a rare show of dry humor, "That's the thought I was just having about you." Maybe we're too much alike to never clash, but we have one thing in common: we both know how to get things done. That's why Paul is sending me to Rome with his letter rather than someone else. He knows whatever the perils, however bad the weather, Phoebe will get his letter to Rome.

I became a Christian when I heard an itinerant preacher in our town square back in Cenchreae. He spoke of Jesus of Nazareth, a poor peasant carpenter, who did nothing wrong except teach boldly, who was killed by jealous enemies, and whom God raised the third day. He boldly preached that Christ was alive and sought to heal us, to bring justice and dignity to all people. This message touched my heart. He asked if anyone present had a home with a room big enough to hold a meeting of any who felt moved to become followers of the Way of Christ. I found myself stepping forward and offering my home. 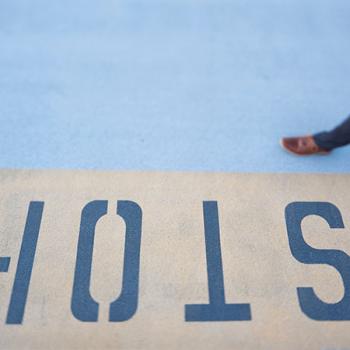 Redeeming the Nasty 19s
Fred Clark
Get Patheos Newsletters
Get the latest from Patheos by signing up for our newsletters. Try our 3 most popular, or select from our huge collection of unique and thought-provoking newsletters.
From time to time you will also receive Special Offers from our partners that help us make this content free for you. You can opt out of these offers at any time.
see our full list of newsletters
Editor's picks See all columnists