"Waste Land" is Filled with Riches 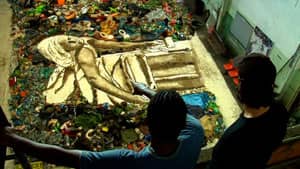 Only in Heaven will we see how much we owe to the poor for helping us to love God better because of them. - Mother Teresa

If one were to assemble a list of the most egregiously overused phrases in documentary review history, "triumph of the human spirit" would undoubtedly fall near the top—a descriptor used with such frivolous regularity as to render it almost meaningless. So it is with some trepidation that I find myself making the following admission: Waste Land is one of those rare and rewarding cases where it truly applies.

Vik Muniz, a Brazilian-born artist known world-wide for his distinctive way of incorporating everyday objects into his sculptures and photographs, has achieved a level of fame and success far beyond his wildest dreams. Now, chafing at the "exclusivity and restrictive nature" of the art world in which he has made his fortune, he is searching for a way to return (and to give back) to his native land. Guided by the advice of his family and friends, he settles upon the perfect subjects for his new artistic/humanitarian project: the catadores (trash collectors) of Jardim Gramacho.

Located just outside Rio de Jenero, Jardim Gramacho (Gramacho Gardens) is the world's largest landfill, taking in over 7,000 tons of garbage each day. Its catadores are members of a strange, symbiotic community that calls the landfill home, sifting through its mountains of trash in search of recyclable materials.

Driven to Gramacho primarily through economic necessity, these laborers are considered outcasts by the rest of Rio. "The most poisonous thing about Brazilian society," Muniz remarks, "is classism." Yet it is to these people (and to their extraordinary stories of suffering and survival) that he is drawn. Muniz descends into the Gramacho favela (shanty town), insisting that he cannot know what he is being called to create until he has met the people that will serve as his inspiration. And what extraordinary people they are.

Take Tião, for example: the charismatic founder of ACAMJG (the Association of Recycling Pickers of Jardim Gramacho) who works tirelessly to improve working and living conditions for the catadores. A keen thinker and avid reader, he recounts the day he first found a discarded copy of Machiavelli's "The Prince" lying upon a trash heap—a discovery which emboldened his efforts to organize the various communities scattered around Gramacho.

Or the gentle Irma: a trained cook who spends her days prepares meals for the catadores. Or Magna and Suelem: mothers whose days on the landfill's slopes make it possible for them to support their families honestly, rather than turning to the prostitution and drug dealing that plagues so many in the surrounding communities. Magna, a quiet woman initially reluctant to tell her story, has chosen this way of life "because it's better than turning tricks in Copacabana. It's more interesting, to be honest. And more dignified. When I get home, I take a shower, and I'm fine." Suelem echoes those sentiments: "We are working honestly. We're earning our living." A local wise man (and fellow catadore) reminds all around him that "it's not too bad to be poor. It's bad to be rich at the height of fame with your morals a dirty shame."

After listening to these stories and countless others like them, Muniz resolves to craft his portraits from the very recyclables that serve as the focal point of his subjects' lives. As the final joining of "art and idea," he decides that they should be the works' creators, not he. "At the end, they're not going to say 'Vik did it.' They're going to say: 'We did it.'" Based on photographs Muniz stages with each subject, the portraits are assembled from bushels and black plastic bags crammed to overflowing with plastic containers, shredded tires, bottle caps, and an endless assortment of rubbish gathered from the treasure chambers of Gramacho herself.

Once the works are completed, Muniz submits them to an English auction house, promising to hand over the proceeds of their sale in their entirety to the catadores who helped him bring them to fruition. In the film's powerful closing moments, Tião is left speechless and overwhelmed when his portrait sells for ₤28,000. Reduced to tears of joy at the sudden realization of dreams he long considered unattainable, he can only say: "God was so good to me, so wonderful."

The lives of many of the artist's models are dramatically and incontrovertibly altered by their experiences. Many resolve to free themselves from Gramacho's clutches, while others returned to their former haunts with the express purpose of lifting their fellow workers up from the depths. "That's what this job brought to me," says one of them, "the will to change." Yet not all are convinced that they need "bettering." Irma initially uses the proceeds of her portrait's sale to start her own food business, but eventually returns to the land fill to cook for her former catedorian clients once again—"We feel good in here," she says. "I feel very good. In this water, in this garbage. I feel very good. . . I don't let anyone go hungry"—proving that humans are always far less predictable than we expect (or wish) them to be.