July 28, 2011 by Marcia Morrissey
"Like" the Patheos Catholic Page on Facebook to receive today's best commentary on Catholic issues. 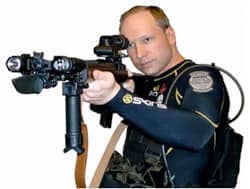 It has been a week since the horrific attacks in Oslo at the government buildings, and on the rural island of Utoyan by 32-year-old Anders Behring Breivik. Last Friday was a busy day for me, so I only caught a few quick early news reports, which were very upsetting; I didn't get a chance to catch up on the news until later that day.

In fact, because I was busy with my family I was only able to hear the first ten minutes of my own husband's Northern Alliance radio program where he and his partner Mitch Berg talked about the more recent updates to this story. I was shocked at the extent of the massacre.

The first thing I thought of was the Oklahoma City bombing. That event occurred three days after my first kidney transplant in April of 1995, and I had the same feelings as I did then. In that attack, it was the first day I felt well enough after the surgery to turn on the TV in my hospital room. I was heartsick at the destruction and loss of life, and it was emotional-overload. I found that I couldn't listen to it for an extended time, because it became too much to bear, but then I couldn't help but turn the TV back on to follow the updates.

Last Saturday, after hearing the updated news, I went outside on our deck to think, and to pray for the victims and their families affected by the horrible acts of this man. I couldn't help but imagine the terror of those young people—mostly aged 16-22—as he stalked them. I prayed for the parents, and family members who weren't sure of the status of their children—were they alive, dead, or seriously injured? As a parent and grandmother I couldn't imagine. The news hit me hard.

This week I have kept all these people in my prayers, because many of them are dealing with preparing funerals, or the aftermath of the trauma, and will for a very long time --probably for a lifetime. Having spent a part of the weekend minding our grandchildren, and then happily hugging everyone before they left, I found myself feeling profound sadness for their loss; they would miss the hugs of their children, forever.

Breivik's attacks were directed at his deep opposition to Islam, immigration, and multiculturalism. Justifying his attack on the government building for these reasons was one thing, and bad enough, but a summer youth camp? It takes a madman to do something like that.

Some of the news reports described Breivik as a "Christian fundamentalist." I will just address the claim that he is a Christian here. I later read parts of his 1500-word manifesto, where he admits he is not a religious Christian, but rather loosely uses "Christianity" for his own political purposes. He calls himself a "cultural Christian." He says that religious Christians have a personal relationship with Jesus or God, which he does not.

He writes, " . . .we do however believe in Christianity as a cultural, social, identity and moral platform. This makes us Christians." He further writes, "Being a Christian can mean many things . . . you don't need to have a personal relationship with God or Jesus to fight for our Christian cultural heritage. It is enough that you are a Christian-agnostic, or a Christian-atheist." What the heck is he talking about?

Breivik also writes that he thinks that faith in God is a ". . . crutch for many weak people, and many embrace religion for self-serving reasons as a source for drawing mental strength. Since I'm not a hypocrite I'll say directly that this is my agenda, as well. However, I have not yet felt the need to ask God for strength yet, but I'm pretty sure I will pray to God as I'm rushing through my city guns blazing." So in other words, God is a "genie in a bottle God," that you summon only when in desperate need, and put back in the bottle when you don't.

Well, good luck with that.

The tragedy of this story spreads out in so many ways. It disturbs me that under Norwegian law, the maximum amount of time Breivik will spend in prison is twenty-one years.

Everyone in this situation needs prayers. The victims, families, and the citizens of Norway.

Breivik also needs prayer, in some ways even more than anyone else. He is a very disturbed person who doesn't have a clue what real Christianity means.