The Confessions of Anders Breivik 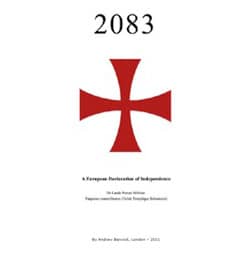 When the news about a bombing and shooting in Norway broke last weekend, I took to Twitter to find developing news and reaction. In the earliest reports, Anders Behring Breivik had been branded a Christian terrorist—the police chief in Norway told reporters that Breivik's religious identity was one of the only things authorities knew about him. But by early Sunday, July 24, journalists Jeff Sharlet (Rolling Stone, Harpers) and M.Z. Hemingway (Get Religion) were using their Twitter accounts to report on their reading of Breivik's 1500-page manifesto. Both were reading the document in order to discover whether Breivik could reasonably be said to be a Christian, and if so, to discover whether his Christianity was an influence on his actions.

Much of the discussion on Breivik and religion has come from sources that do not seem to have bothered to scrutinize the Breivik manifesto. I asked Hemingway and Sharlet to help us out, and they were both generous enough to answer some questions via email. Note: While both respondents' answers appear below each question, Hemingway and Sharlet are both responding to the questions listed here, and not to each other's responses.

How much of the manifesto have you read? How would you summarize it?

Hemingway: I read it all over the course of five days. It's difficult to summarize because it has so many different features. Much of it is just lifted from other sources, usually with credit and sometimes without. But each of the parts, including those Breivik presumably wrote himself, are well-written, cogent, and coherent.

The manifesto critiques cultural Marxism, feminism, multiculturalism, and the Norwegian Labour Party. It discusses the doctrine, practice, and spread of Islam and the problem of Muslim extremism. It castigates the Christian church as an impotent, divided, and fundamentally flawed institution. Then the document gets into a grandiose plan for a European Resistance Movement complete with a renewal of Crusader orders, bomb-making techniques, and tips for avoiding getting caught. Interesting aspects included his advocacy of eugenics and the elaborate reward system of medals and insignia he'd designed for people who follow his teachings.

Sharlet: I spent 3 and 1/2 days reading the whole thing, but since I'm writing about it for a magazine, I'll be reading it more carefully. Part of the challenge of reading it is identifying the changes in tone or style that indicate a passage is from an unattributed source, which you then have to do your best to track down. Then there are the clearly identifiable sources that you need to look at to see the context from which he or his "contributors" have pried them loose. For instance, a blogger associated with the popular anti-Islamic blog Gates of Vienna is quoted at length on an analysis of two poems by Ted Hughes, a major poet with no connection to these issues. So, if you're serious about understanding this, you track those poems down and look at the context from which they were lifted. That's a long process. I'm very skeptical of pundits like Bill O'Reilly who declare on this massive document with great certainty. That's just not real research.

Hence, my summarization is limited: Whether or not he's insane, this doesn't read to me like the text of a lunatic. He experiences his hatred as rational and presents it as such, fairly effectively if you don't know anything else about these subjects. For that reason, I'm afraid this manifesto's going to have legs, like "The Unabomber Manifesto."

Hemingway: It's complicated but he's also quite clear about his rather idiosyncratic views. He says, "I'm not going to pretend I'm a very religious person as that would be a lie," but he views Christianity as the most pragmatic umbrella under which to gather Europeans in a global fight against Islam. He is familiar with Christian imagery, argues for a more Calvinist approach at times, and yet wishes the church were united under a powerful, militant papacy. He has a whole section devoted to his view that a "traditional church" would be more appealing than the current Protestant church of his homeland. His vision for a renewal of the Knights Templar to battle Islam is likely the result of a combination of influences, including his own Masonic background, a knowledge of their effectiveness in combating Muslim expansion, and some rather heavy video gaming of the RPG variety. When he speaks of Christianity, he conceives of it as a shared cultural system under which European Christians, secularists, atheists, and agnostics can and should feel comfortable. So while personal piety is not a feature of his religion, he is very supportive of how Christianity has shaped Western culture.