Elmer Gantry and the Cult of Personality

July 14, 2011 by Joseph Susanka
"Like" the Patheos Catholic Page on Facebook to receive today's best commentary on Catholic issues.

"I have passed the test. I will diminish, and go into the West, and remain Galadriel." 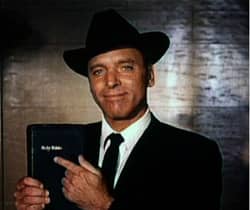 We Americans are obsessed with celebrity. We expend vast amounts of time, energy and money in the obsessive study of our heroes; we live vicariously through the paparazzi-plagued existences of those more "fortunate" than ourselves.

So it comes as no surprise that the Catholic Church in America has given rise to its own peculiar brand of media star: the Celebrity Priest.

Sadly, our knowledge of human nature should preclude our surprise when one of these "stars" of the church flames out. From "Life on the Rock's" Father Francis Mary Stone to Father Thomas Euteneuer of Human Life International to Father Alberto Cutié, a rising televangelical star "gone rogue," we find ourselves in a seemingly endless storm of bad news about the broken promises of our priests.

John Corapi's sudden and precipitous fall from grace last month was perhaps the most sensational and damaging of all, unleashing a maelstrom of allegations reactions that have unsettled many of us who had cherished his stern and uncompromising stances. His videos were key components in a series of retreats I attended during my formative college years, so last month's upheaval was personally very painful.

In this troubling context, my recent return to Elmer Gantry and its account of a preacher's meteoric rise and fall was both agonizing and timely, helping to address some of the questions stirred up by the unexpected appearance of Corapi's "Black Sheepdog" why is it that we find ourselves in these predicaments so regularly?

Based on a controversial Sinclair Lewis novel, Elmer Gantry follows a traveling salesman of dubious morals and unlikely hair through a Christmas Eve of riotous carousing and a Christmas Morn of floozies and vicious hangovers. A brief phone conversation with his tearful mother reveals Gantry (Burt Lancaster) to be both charming and casually cruel—a man habituated to pursuing his desires above all else. Extricating himself from his mother (and his floozy), he spends the remainder of Christmas on a freight train, sleeping off the effects. Upon disembarking, he finds himself drawn to a small country church, where he spends a peaceful evening belting out spirituals with its parishioners.

The next day, he happens across an attractive young woman summoning the townsfolk to a revival meeting that very night with promises of a grace-filled evening of prayer and repentance under the guidance of Sister Sharon Falconer (Jean Simmons). His curiosity piqued as much by the promise as the attractive girl making the invitation, Gantry attends, only to find himself instantly smitten with the lovely young preacher.

Gantry sets to work on Sister Sharon, eventually persuading her to let him participate in her revival services as a sinner who has seen the error of his ways and now embraces the challenge of converting anyone and everyone who stands in his way. His obvious flare for the dramatic and his keen salesman's instincts soon earn Sister that which has eluded her for years: an invitation to the city of Zenith, and a chance to bring her message to thousands of unchurched urbanites.As the day of the big revival draws near, details of Gantry's troubled past return to haunt him: Sharon learns that he was expelled from a Kansas theological seminary for brazenly seducing a young woman, Lulu Bains (Shirley Jones), the daughter of a local deacon. Shaken, Sharon assures herself (and Gantry) that "God sent you to me as His instrument, not as my lover." Sadly, her naïveté is her undoing; her resistance as fleeting as was Lulu's all those years before.

Gantry, busily beating off the attacks of the local newspapermen—who are too cynical to put their faith in spiritual figures, yet too self-righteous to allow others to do so—finds himself under attack from an unexpected quarter: the tarnished, vindictive Lulu reappears, and the resulting situation grows increasingly unmanageable. Gantry eventually finds himself an unwitting (if not entirely blameless) participant in a great tragedy, forced to reconsider both his previously-hedonistic life and the role God will (and must) play in his future exploits.