The Ethics of the Universal Potlatch

This is my first contribution to what I hope will be a weekly column here at Patheos. I am delighted to be in such good company with other Pagan contributors, both those I know and those I have not (yet?) met. I hope to explore some of the insights I think Pagan spirituality brings to challenge Western modernity, which far more than many realize, incorporates transcendental monotheistic assumptions antithetical to our own, and does so even in its secular guise.

If I am right, as we grow and prosper as a spiritual community, we cannot help but become involved in a deep rethinking of Western Civilization's heritage. I suspect this can come none too soon, for if it continues its present course, Western Civilization will destroy many of its own foundations. Some are already gone. Nowhere is this more the case than modern America.

This is particularly true in agriculture and food production. Industrial farming and food processing by international corporations is a long-term threat to the quality of our food and the health of the earth. Some of the issues are widely recognized among people who pay attention to these kinds of things. The growth of "private property" in GMO seeds, combined with engineering in genes that prevent the seed viability, destroys independent agriculture and gives corporations ownership of seed stocks. Plants are developed for their suitability for long-distance transportation and shelf life rather than nutrition and taste. The conditions prevailing within modern industrial hog farms and feedlots would turn the stomach of any decent human being. Pesticides are increasingly deadly and artificial fertilizers have become serious pollution problems even in parts of the ocean.

Many Americans have shifted to organic foodstuffs because they think, I believe correctly, that organics are healthier and tastier than their corporate alternatives.

But this is only a part of the reasons why we should avoid corporately produced food as much as we possibly can.

But food production, as even the earliest human beings appeared to understand, is a profoundly ethical undertaking. As the Pagan/Buddhist poet Gary Snyder wrote, we are all both eaters and eaten at the big Potlatch of life. We are given to, and we give.

It is possible that humanity's first thinking about issues of morality and right action arose from confronting the central mystery of human life: that it exists by taking life from others. Ritual and rules arose to honor and respect that which we eat, in the hope we could continue the relationship indefinitely. Some of these approaches were wiser than others, but all recognized that we were enmeshed in a world of values where we should act appropriately, to stay in harmony with it. I believe this insight, which extends back to the dawn of our kind if not before, is an essential truth that Pagan spirituality provides our world.

In other words, food production is intrinsically an ethical undertaking not just with respect to the consumer, but also with what we produce, harvest, or kill.

Consequently, it is impossible for publicly held corporations to act appropriately in the realm of food production. They are intrinsically incapable of it. The only exception is when the founder still runs the company, because he or she, being a human being, is motivated by complex values and can sometimes put them ahead of profit, as is the case with Starbucks and Whole Foods. But that is just for the first generation. Afterwards, the market in all its amoral impersonality takes control through its agents, the shareholders.

Regulations can substitute for morality up to a point, just as laws against theft and murder will keep some sociopaths in line. But corporate behavior will be reliably decent only so long as the regulations are both appropriate and enforced. Neither is the case in America today.

If the world is sacred, and all within it an expression of Spirit, we act most appropriately when we treat what we consume with respect. This is more important to my mind than whether we are vegetarians, vegans, or omnivores. 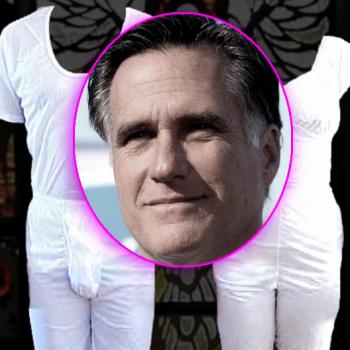 Joe Biden is my president: Responding biblically to leaders with whom we...
Jim Denison
4

Retired At Last!
Linda LaScola
Get Patheos Newsletters
Get the latest from Patheos by signing up for our newsletters. Try our 3 most popular, or select from our huge collection of unique and thought-provoking newsletters.
From time to time you will also receive Special Offers from our partners that help us make this content free for you. You can opt out of these offers at any time.
see our full list of newsletters
Editor's picks See all columnists