July 14, 2011 by Marcia Morrissey
"Like" the Patheos Catholic Page on Facebook to receive today's best commentary on Catholic issues. 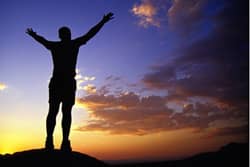 About a year after my former husband filed for divorce, some friends invited me to go on a week-long retreat with them, and I went. I needed it. That year had been so difficult, and I had to get alone with God for some direction in my life.

With their help, I climbed up a steep hillside to the top where there was a large cross. I sat down on a boulder, and much to my embarrassment, began to cry uncontrollably. I just wanted to pray, and the only thought that came into my mind was, "Lord, please help him...please help him...please help him." Over and over, for over an hour, that was the only thought or prayer I could say. I was crying so hard, but couldn't stop. Believe me, I wanted to stop—not because I didn't want to pray that prayer, but because I was so embarrassed to be so out of control. My friend gave me an extra t-shirt he had in his backpack, because I didn't have any tissue and was a mess!

That prayer was almost a mantra—something I couldn't stop, and I believe it was the Holy Spirit giving me that prayer—it was almost as if it came from outside of myself.

When we descended the hill, I felt completely drained. Not in a bad way, though. I was strangely comforted and calm after so many tears. It was one of the most spiritual experiences of my life. When I tried to explain it to someone later, they said it was the "gift of tears." I had never heard that expression before, so I'm not really sure, but it was the beginning of letting go.

I heard a talk on forgiveness that said to forgive means to let go. It isn't that the wrong done isn't still wrong, or that you forget it. However, letting go is the beginning of healing and moving forward and not being stuck as a victim, which can only harm you in the long run. This isn't to say that everything was immediately fine; it took a long time to heal, but that was a beginning.

Forgiving is sometimes a series of decisions to let go again, and again. We have to do this, though, because to hang onto unforgiveness only hurts us. Unforgiveness is like having a boil that needs to be lanced to drain the poison in order to heal.

Forgiving doesn't necessarily mean that the person who hurt us is going to ask for it, and sometimes we have to walk away from a person or situation. The forgiveness is something we need to do for ourselves.

It's true: sometimes it can take us a long time to let it completely go, because the consequences of whatever happened are still playing out. For me, that mostly meant how all of this affected my son, and it wasn't until he was in his middle school years that he finally confronted the hurt he had denied for so long. He had transferred all the hurt and anger, and it came out in different ways he was unaware of. It came to a critical point, and it wasn't easy at all. However, it was necessary for him to finally let go to be able to heal.

I was thinking of the verses in Matthew where Peter asks Jesus about forgiveness. He uses the number seven, but that doesn't mean a literal number. Numbers in Jesus' time had different meanings.

When Peter asked this question, perhaps he thought he was being generous with how forgiving he sounded:

I think that the Lord was telling Peter, and us, that it is for our own good to forgive—let go over and over. It is the only way to be healthy in mind, spirit, and body. When we confess, and ask God to forgive us, we can be sure that He does instantly, but He still allows the natural consequences to help us to grow. It is when we realize our own need for forgiveness that we can know how important it is to forgive others.