(There's been some squawking about Dumbledore's homosexuality—Rowling confirms that her character is gay—but he turned away from his crush at this point and there's no mention of any other partners. So far as we are told, he lived chastely, which would place him well within classic Christian morality.)

James and Lily Potter's gravestone inscription. When Harry finds his parents' grave, he sees an even-more-explicit inscription: "The last enemy that shall be destroyed is death." Harry doesn't know how to take these words, and finds them somewhat creepy. Hermione explains that it means "living beyond death. Life after death."

Harry doesn't say so out loud, but he rejects the idea. He thinks of his parents' bodies decaying underground, and concludes they neither know nor care that he has come.

This time, the quote comes from St. Paul. He told the Corinthians that, at the end of time, Christ will conquer all earthly powers and "put all his enemies under his feet. The last enemy to be destroyed is death." Then Christ will submit everything to God the Father, "that God may be everything to everyone" (1 Corinthians 15:24-26, 28).

Perhaps these lines were omitted from the movie because they led to theological complexities. Still, Rowling told MTV that these inscriptions "sum up—they almost epitomize the whole series." In other words, if you want to understand the Harry Potter saga, you have to understand these words.

And yet, in context, they're rather shocking. Most readers assume that the religion of these witches and wizards is witchcraft. Yet the characters don't handle treat these magical powers as if it were a spiritual matter. There is no awe or deference, no invoking of deities when casting a spell, or calling on supernatural powers for help. Their magic apparently has no spiritual significance at all. They practice it instead in a simple, matter-of-fact way; a skill they have mastered, like using a remote control. (Conversely, some find the ways of ordinary humans fascinating: Ron's dad collects electric plugs, trying to discover their mysterious power.)

If these characters have any religion, the leading candidate would be Christianity. These family members are buried in a churchyard; they must have had some connection with the church. Sirius Black is Harry's godfather; the two must have participated in some kind of rite. Harry conceals the remains of a fallen comrade beneath a tree, then carves a cross into the wood; to him, the symbol must have meant something.

Let's look at some more examples:

Hermione teaches that the soul survives the body. In both book and movie, Hermione explains to Ron and Harry that the bit of soul hidden in a horcrux dies when its container is destroyed, and in that way a horcrux is the opposite of our bodies.

"Look, if I picked up a sword right now, Ron, and ran you through with it, I wouldn't damage your soul at all."

"Which would be a real comfort to me, I'm sure," said Ron.

"It should be, actually! But my point is that whatever happens to your body, your soul will survive, untouched," said Hermione.

Encounters with the departed. In both book and movie, as Harry walks toward his final encounter with Voldemort, he discovers the Resurrection Stone, which can restore the dead to the presence of the living. There in the woods his parents and friends appear "less substantial than living bodies, but much more than ghosts." With this, Harry's doubts about life after death are at last resolved.

He asks, "Does it hurt?" and his godfather Sirius replies, "Dying? Not at all. Quicker and easier than falling asleep." Sleep is frequently used in the New Testament as a metaphor for death, showing that it's not an ending but a transition to a different kind of life. Harry's companions promise to remain with him till the last—echoing the experience of Christian saints and martyrs who saw at the end that they were surrounded by "a great cloud of witnesses" (Hebrews 12:1).

Repentance for salvation. In the book, but not the movie, at the very moment of their last confrontation, Harry suggests to Voldemort that he "[t]hink, and try for some remorse." Voldemort is more shocked by these words than by anything Harry has ever said. But Harry has had a glimpse of the state Voldemort is headed for after death. "It's your one last chance." Harry tells him. "I've seen what you'll be otherwise. Be a man...try.... Try for some remorse...."

In Christian theology, all sins can be forgiven; no one is beyond redemption. But you have to ask for it. You have to be sincerely repentant, humble enough admit your wrongs and accept God's love. Voldemort's pride has placed him beyond this possibility; it is even beyond his imagination.

A night with Lot in Sodom, better see that twice
Fred Clark
2 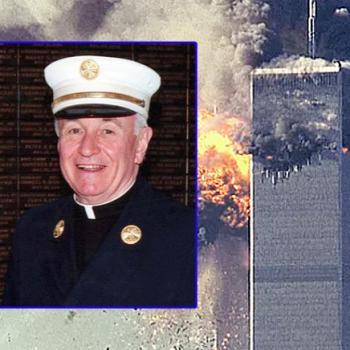 Will a gay Catholic chaplain who died on 9/11 ever be made a saint?
Barry Duke
3 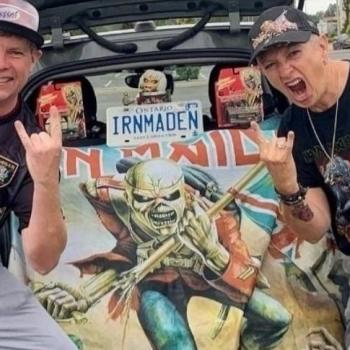 Whiny Conservative Mom Demands Resignation of Principal Who Loves "Iron...
Hemant Mehta
About
Get Patheos Newsletters
Get the latest from Patheos by signing up for our newsletters. Try our 3 most popular, or select from our huge collection of unique and thought-provoking newsletters.
From time to time you will also receive Special Offers from our partners that help us make this content free for you. You can opt out of these offers at any time.
see our full list of newsletters