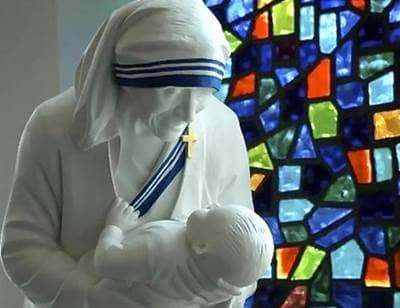 In Mother Teresa, CEO, Ruma Bose and Lou Faust explain how a humble ministry founded by a diminutive nun in 1948 became an organization that today operates in over one hundred countries with four thousand workers and that has managed over a billion dollars in capital.

How did Mother Teresa's Missionaries of Charity become one of the world's most influential organizations? Bose and Faust argue that Mother Teresa "applied her ethical principles and values to work she was passionate about"—and that the practices employed by this unassuming but powerful nun can be utilized by each one of us.

In the early 1990s, Bose served Mother Teresa as a volunteer for the Missionaries of Charity. Ever since, she's reflected on lessons she learned there, and has now distilled them into eight principles for "running an organization, a single project, or your everyday life."

Click through the gallery to see five of our favorite principles, then visit Patheos' Mother Teresa, CEO book club to join in the discussion.

Dream it simple, say it strong

Mother Teresa's vision was to serve the poorest of the poor, and to do so without apology. She was effective in her mission because her dream was clear, and she communicated it with boldness in every word she said, every way she lived.

Wait! Then pick your moment

While Mother Teresa's vision was clear, she did not get to fulfill her dreams immediately. She served with the Sisters of Loreta in Dublin for twenty years before launching the Missionaries of Charity. Twenty years. She had the patience to pick her moment and to remain ready during the years of waiting.

Discover the joy of discipline

As Ruma Bose discovered during her sojourn among the Missionaries of Charity, Mother Teresa's organization ran like a happy clock. The sisters awoke at 4:40 a.m. each day for prayer, then Mass, then breakfast, then work. They embraced this routine day in and day out—and in so doing, found limitless joy. As Mother Teresa said, "The miracle is not that we do this work, but that we are happy to do it."

Communicate in a language people understand

As her profile grew, Mother Teresa had to learn to communicate with a great variety of people, from the poor to politicians and powerful CEOs.

But she didn't spend much time and energy shaping her communication style. Rather, she paid attention to people—she listened carefully and closely, and in so doing, learned to communicate with each person in a language that he or she could understand. She didn't talk through or past or over people—she sought to know them, no matter who they were, and communicated in their context.

Use the power of silence