The Booth at the End and Our Faustian Selves

July 21, 2011 by Joseph Susanka
"Like" the Patheos Catholic Page on Facebook to receive today's best commentary on Catholic issues. 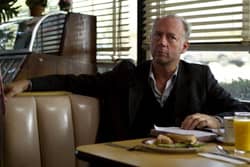 What would you do if you knew with absolute certainty that the completion of a particular task would bring about the fulfillment of your greatest wish? Would you be willing to commit disagreeable (even immoral) acts to achieve your dreams? How far would you go to get what you want?

That is the question posed by The Booth at the End, the latest morality play/web series from Hulu, the same folks who brought us The Confession earlier this year.

The series' premise is startlingly simple: the Man (Xander Berkeley) sits in a booth at Cadillac Jack's Driver-In and waits. People—convinced that he can "get things" for those who want them badly enough—visit his booth, and he makes a bargain with each of them: if they complete the task he assigns, they will get what they so desperately desire.

But his bargains are harsh and unsettling: James, a successful businessman seeking to avert his son's death from leukemia, is ordered to kill a young girl. Sister Carmel, a faithful nun for fifteen years who yearns to "hear God again," is told that the only way to guarantee the return of her faith is to become pregnant. Mrs. Tyler, a feeble retiree struggling to cope with her husband's Alzheimer's, is tasked with detonating a bomb in a busy coffee shop, while Jenny, a pretty, shallow young woman, must rob a bank in order to achieve the physical beauty for which she longs.

How far will they go to get what they want?

Berkley, an under-appreciated veteran of the stage and screen is mesmerizing as the eerily anonymous Man whose bargaining powers drive the story forward.

As The Booth begins, the Man clearly resembles a modern-day Mephistopheles, smiling silkily while turning his clients' greatest weaknesses against them, fomenting sinfulness and suffering at every turn. When Mrs. Tyler asks "Do you make everyone who comes to you hurt someone?" the Man responds "Only some," with a dismissive, half-disappointed shrug more threatening than the words themselves.

Gradually, however, the Man's omnipotence is revealed as nothing more than a peculiar sort of omniscience—knowledge only of very specific actions and their consequences. He is not the one who brings about the transformative events, but their harbinger. "How did you do that?" a man asks in amazement when his bargain comes to fruition. "I didn't," the Man says. "You did." "You have to know" says another, but he demurs: "I don't know." Sister Carmel, battling her spiritual sterility, pleads: "If you can really let me hear Him, just let me hear Him."

Time and again, he reminds those who have come to him for help that he doesn't know what is going to happen or how their wished will be fulfilled. He knows only that they will indeed be granted—if his conditions are met. There's one final caveat, though: they must return to Cadillac Jack's and describe their actions to him in detail.

For the Man is not Mephistopheles, but Argos: an observer, not an architect. He is fascinated by the power of his visitors' desires and by the lengths to which they will go to get what they want, and it is that fascination which drives him and his unsettling bargains.

Yet not all his bargains are ugly ones. Melody, a young teenager whose only wish is for her father to receive the funds needed to save his restaurant, is ordered to find a shut-in and persuade him to leave his home. And what of Doris the waitress, the only one in the diner who wants nothing from the Man and his bargains? As the loose threads of the Man's many clients are woven together, the hope for a peaceful resolution to their many negotiations grows stronger.

But will the Man allow such happiness; perhaps even facilitate it? Or is there another, harsher bargain yet to be driven?

Speculating on the themes of an incomplete series is a risky business, and the show's propensity for revealing its twist and turns in short, seemingly unconnected vignettes leaves the door well ajar for a radical shift in the Man's motivations. Yet the show's most powerful message is not dependant on him at all, but on the dangers of allowing ourselves to drive Faustian bargains, replacing God's clear call to holiness with our own selfish desires. The question we must daily ask ourselves is not "How far will you go to get what you want?" but "How willing are you to give up what you want for the sake of where you are going?"