I've just returned from a pilgrimage to Gettysburg and Virginia as part of my work with the military dead. I have been pushed for some time to visit Civil War sites since that war and its aftermath forms such an deep and integral part of United States history. This trip helped me connect more deeply to the military dead and to the very land upon which I live.

I'll be writing about that over the next couple of weeks, but this week I want to cover some very basic points about ancestor veneration. Since I've started writing publicly about honoring our dead, I often receive emails with the very questions that I am going to cover today. It was no surprise, when I returned from my recent trip, to find the same questions gracing my inbox yet again.

They're good questions and I think they deserve to be answered here, so that's just what I'm going to do.

Question 1: Should I honor my monotheistic ancestors?
Of course. Yes. Honor your monotheistic ancestors (unless of course they were abusive to you, in which case—best case scenario—an elevation might be in order). The exception to this, for me and some of my colleagues, is that generation which consciously chose, for whatever reason, to abandon their ancestral ways and embrace monotheism. Those we do not honor. Those we call out. We name their shame and confront them with it. We demand that they make reparation, that they work with us and with our other ancestors now to repair the damage to which their poor choice led. We're cleaning up their mess after all. The beauty of wyrd is that they are still able to affect it even after they are dead. They can make reparation and if they choose to take responsibility and do so, then they too may join in the veneration the other ancestors receive.

As to those who were raised monotheist and who may have been very devout in their own way, they bear no shame. Honor them just like you would any other ancestor. They'll let you know if they want something specific, or don't like a particular offering. Ancestor veneration is for everyone. We all have ancestors after all. Give them their due.

Besides, some of those monotheistic ancestors may have been parents, friends, and grandparents. They may have been people you loved dearly in life. That love doesn't go away just because they're dead. It's only right and proper to honor them.

Question 2: If I offer tobacco, do I have to smoke it?
This question always makes me laugh. It's a good question, but being a now and again smoker, I have vivid memories of an incident that happened to me about fifteen years ago. I walked in on my Santerian roommate trying to make an offering to Ellegua. He was trying to smoke a cigar as part of his offering. He was also green, coughing, hacking, and all but doubled over. The poor boy was not a smoker. I just took the cigar and smoked it for Ellegua and later, when everything was over, and the ritual concluded, laughed my head off. Of course after that, I was also the one smoking those cigars every Monday for my friend's weekly Ellegua ritual---no good deed goes unpunished after all!

To answer this question, however: no, you do not have to smoke the cigarettes you give as offerings. In fact, I usually don't. I might smoke like a chimney when I'm doing ancestor work (tobacco consecrates in a very special way and renders that which is said sacred. For some of us, we were taught to keep it lit usually by smoking our own cigarettes during ancestor work), but when I give tobacco to the ancestors, I almost never smoke their offerings. You can lay out loose tobacco too or just the loose cigarettes. If you're leaving the cigarettes in a public place (say at a grave) take the filters off first. Discard the filters in the nearest trash can. They aren't quite so biodegradable as the tobacco itself. I also recommend using "American Spirit" tobacco, as it is very pure tobacco.

Question 3: What do I do with the offerings?
Well, my usual answer is: it depends. Usually I set out food and other offerings and leave it sitting out for at least twenty four hours. After that, I take it outside and put it either in the woods behind my house, or for liquid offerings, I pour them out at the base of a tree in my garden (a very happy tree that must be drunk as a skunk most of the time given how many offerings I make!).

Sometimes, particularly with ancestors who lived through the Depression, specific dead will object to food being left out for them. In this case, invite them to eat with you and share your own meal with them. Don't leave it out, but as you eat, make the meal and offering of time and attention, a family dinner, with your dead. 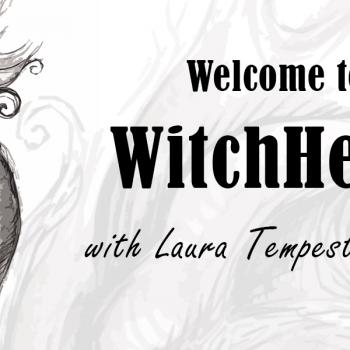 Choosing Gratitude When You Don't Feel Like It
Joey Willis
4