August 23, 2011 by Kathy Coffey
"Like" the Patheos Catholic Page on Facebook to receive today's best commentary on Catholic issues. 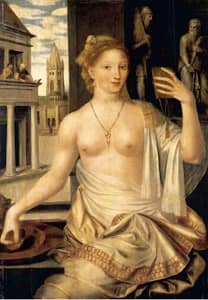 We know little about Bathsheba because her story is overshadowed by King David's. But from her, we do learn this: from strange circumstances, great good can come.

The skeleton of the story is well known: David sees Bathsheba bathing on the roof. As Frederick Buechner describes the scene in Peculiar Treasures: "He saw both that he had to have her at any cost, and that the cost would be exorbitant." Attracted by her beauty, the king sleeps with her and they conceive a child. Then he arranges to have her husband Uriah killed in battle. After his death, they marry, their child dies, and Bathsheba later gives birth to Solomon.

What's stunning is that we know nothing of Bathsheba's reactions to dramatic changes in her life. She is bathing innocently, unaware of who's watching—then suddenly, the king sends for her. That is not an order one can easily disobey. Nor can she resist the king's advances. She becomes a pawn in a royal game and has no say about her own destiny.

Did Bathsheba love her first husband? From the cameo portrait, we know Uriah has integrity, refusing to go home (as David wanted, providing the handy excuse that he's the dad) while his soldiers camped in the field. He has such noble loyalty to David that it provokes the prophet Nathan's famous parable, accusing the king of being like the rich man who steals the only lamb of a poor man. When David is outraged at the injustice, Nathan reminds him, "You are the man."

At Uriah's death, Bathsheba "made lamentation for him." But after the mourning, she marries David and bears his son. Again, we hear of David's prayer for the sick child, but can only imagine hers. We know little of her motherly grief except that the king "consoled" her and she bore Solomon.

When David is dying, Bathsheba acts to ensure that Solomon inherits his throne. By then, the mature woman has taken charge. As the future king's mother, she has an independence she didn't have as a girl.

If we could have a cup of tea with Bathsheba, she might point to her personal drama as a prime example that we can play roles we can't imagine, that our little lives are bits of a vast, divine pattern. In her novel Evensong, Gail Godwin draws on Father Raymond Brown's book, A Coming of Christ in Advent. She notes that none of the upstanding patriarchal wives like Sarah or Rachel are mentioned in Matthew's genealogy. Instead, each one named has "scandal or aspersion attached to her."

Bathsheba takes her place with Tamar and Rahab to prove that Jesus invites "an equal opportunity ministry for crooks and saints." That complex mix of nobodies and hooligans who formed the genealogy of the savior tells us that we play our parts too. God uses our peculiarities and gifts for powerful reasons we never guess. Godwin concludes, "Who of us can say we're not in the process of being used right now...to fulfill some purpose whose grace and goodness would boggle our imagination if we could even begin to get our minds around it?"

From Nathan's criticism of David, we know that God doesn't take kindly to using or possessing people. Indeed, the death of the first child is read as punishment for the king's arrogance. But why must the innocent mother suffer for the father's deed? The unanswered questions raised by Bathsheba's story prepare the way for a Christ who never manipulated nor demeaned anyone. Indeed, he was actively concerned about the welfare of the most apparently insignificant woman.

Buechner in the book mentioned earlier imagines David on his deathbed looking back on the lovely young woman who had inspired such fatal consequences. From that perspective, David realizes that the story wasn't about them. Instead, it was a step towards "the child of their child of their child a thousand years thence who he could only pray would find it in his heart to think kindly someday of the beautiful girl and the improvident king who had so recklessly and long ago been responsible for his birth in a stable and his death just outside the city walls.

This piece previously appeared in St. Anthony's Messenger, and is reprinted with permission of the author.