I am a book person.

I don't know how many books I own. As I mentioned in my last column, my home is covered with them. When I first moved into my own apartment, I owned no furniture except for a bed and a camp chair, but I had nine boxes full of books. Part of this can be blamed on my choice of being (alas) an English major; part of it can be blamed on my long-standing fear of public libraries, which has forced me to buy where others might have borrowed. But mostly, it's simply because I like books. I like to read them, to look at them, to touch them. I fear the day when I am finally forced to get an eReader.

I have done no surveys of other book people, but I suspect that, like me, most have their favorites, the books that sit at the core of their collections like the black hole at the center of the galaxy. Though we may read hundreds of other texts, somehow, we keep coming back to one, a book that informs all of the others. If one is a writer, that book provides both the highest hopes (I could do something as good as this!) and the darkest despair (I am never going to do anything nearly as good as this.) Perhaps it is not objectively the "best" book we have ever read, but if pressed, we would have to call it the most important.

For me, that book is Neil Gaiman's American Gods.

I was 16 when one of my uncles introduced the book to my family. I carried that book with me everywhere for a month, a trade paperback with a lightning bolt streaking across a green field on the cover. I read with anticipation as Shadow Moon, the story's protagonist ("hero" may be a bit much,) encountered the one-eyed man in the pale suit named Wednesday. I read as Shadow and Mr. Wednesday made their first trek across the highways of America, through St. Louis and Indiana and Chicago. I read as they were joined by the bitter old Russian called Czernobog and the feisty man with the West Indies patois named Mr. Nancy, and watched their descent into that phantasmagoria, that labyrinth, the House on the Rock. At the end of that chapter came the revelation, a sentence that burnt itself into my mind like a cattle brand:

Then the lights went out, and Shadow saw the gods.

I understood before then who these eccentric old men were before that line, of course: it would be hard for someone raised a pagan not to recognize Mr. Wednesday as Odin. But the book's universe shifts on that sentence. Shadow begins an unbeliever, and the first chapters reflect that state. There are plenty of things that might be magic, might be gods, but they could also just be coincidence. When the lights go out, there's no escaping the reality of myth. Mr. Wednesday is Odin—not someone who might be Odin, not someone who acts a lot like Odin, but is Odin.

When I was 6 years old, I had a conversation with another boy about Jewish people. (We had been learning a Hannukah song for our choir's holiday carols.) I mentioned how they didn't celebrate Christmas because they weren't Christians. The boy frowned and shook his head. "That's not right," I remember him saying. "Everybody's Christian." He said it with the certainty of a child; this was not a generalization, but a fact. I've always been a little afraid that he's right. Maybe everybody's either Christian or a fool; maybe the old gods really were falsehoods.

Gaiman gave me a universe where the gods, my gods, were real, and not just in the remembered sense that many pagans still insist on today, where the only acceptable image of deity is in clothing and mannerism that fell out of fashion two thousand years ago. In American Gods, they still walked among us, a little threadbare, a little weary, but alive. Real.

American Gods has shaped the way I viewed my religion ever since. It's safe to say that the most of my great spiritual experiences would not have happened if I hadn't read this book.

I have read American Gods six times: that first whirlwind trek through it in my junior year of high school; two rereads during college; and three times in graduate school, where I taught the book to college sophomores as part of a class on American belief and identity. At this point, it's as close to me as a lover—the breathlessness of our first encounter has passed, replaced with a deeper appreciation brought on by our years together.

The slightly expanded tenth anniversary edition has given me an excuse to read it again, and as I wind my way through the story for the seventh time, I still find the things that have always drawn me to it: the clever mythological references, the twists Gaiman puts on the gods, the frankness with which the novel addresses problems with the American psyche. It is not a perfect book—bored college students will reveal the flaws in your favorite novel like nothing else—but no other book has affected me like American Gods, and I doubt any ever will. Perhaps, as one of my best students said, "The prose is not up to the level of Faulkner," but it is the most important book in my life, as a reader, a writer, and absolutely as a pagan.

There is the piece of advice Shadow is given at the outset of his story, repeated many times throughout: Believe everything. Every time I read American Gods, I am reminded why I try my best.

Animal Sacrifice in Ancient Greece: Why Did They Do It?
Andrew Henry
2 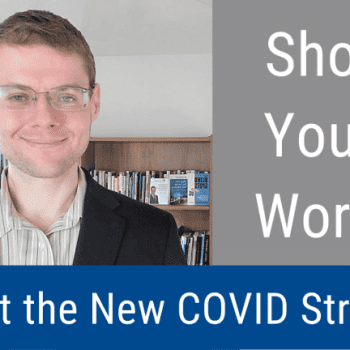 Should You Be Worried About the New COVID Strains? (Video and Podcast)
Gleb Tsipursky
3

Criticizing the Logic of the Atonement (2 of 2)
Bob Seidensticker
Get Patheos Newsletters
Get the latest from Patheos by signing up for our newsletters. Try our 3 most popular, or select from our huge collection of unique and thought-provoking newsletters.
From time to time you will also receive Special Offers from our partners that help us make this content free for you. You can opt out of these offers at any time.
see our full list of newsletters
Editor's picks See all columnists