Can a Muslim Ever Become President? 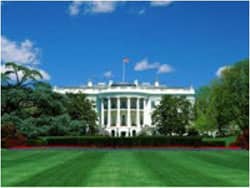 I was talking to my 4-year-old the other day, and I asked him a simple question: "What do you want to be when you grow up?" His innocent, yet ambitious response was: "A baseball player, soccer player, doctor, hafiz (one who memorizes the entire Quran) and an elevator-man"—he is obsessed with pressing the buttons on elevators, so much that he has apparently made this his lifelong dream, so who am I to stop him? As a parent, I admire the youngster's energetic, wide-ranging dreams. I told him if he becomes all those things, he could eventually have his own elevator in his house. My belief is that with hard work, sincerity, and determination, any professional aspiration is achievable.

But when the time comes, what if either of my children tells me that he wants to be the President of the United States? What do I tell them? Do I tell them, "Sorry boys—we're Muslims, and that is not a reachable goal"? The current state of race relations in the U.S. tells me that it would be a potential dream deferred.

As children, we seemingly all used to have the same list of future potential jobs: athlete, astronaut, doctor, and president. Even as a child born and raised in the Deep South, I never felt a doubt that my professional aspirations would ever be limited. With a family that has roots in the U.S. since the 1950s, I felt as much as part of the fabric of America as anyone else. But now we are living in the post-9/11 reality, with Muslims constantly under the microscope. The term "Islam" has been co-opted and turned into a political poker chip in order to spread fear and distrust of the American Muslim community.

When my father went to work each day in Opelika, Alabama in 1966, his co-workers didn't ask the question of whether or not he was plotting against them. The handful of Muslims that gathered in a house to do Friday prayers in Auburn, Alabama weren't being watched by the FBI to see whether they were spreading a militant message. But this was the same Islam being practiced in the 1960s as is being practiced today, so why the change in perception? The answers simply boil down to the fact that it has become politically beneficial to embed fear among the public, along with a sense of "otherness" of the Muslim community.

Cain Enablers
In the last forty years, bigotry and xenophobia have resided mainly beneath the surface. It was considered taboo and a career-killer to insinuate that you would not hire a person based on race or religion—that was, until the most recent wave of Islamophobia has infected the American landscape. For an example of how this paradigm has shifted, just examine the case of presidential candidate Herman Cain.

As the former Godfather's Pizza CEO and talk-radio host hit out on the campaign trail, Cain was asked by an interviewer whether he would be comfortable appointing a Muslim cabinet member or Supreme Court Justice. His reply:

No, I would not. And here's why. There is this creeping attempt, there is this attempt to gradually ease Sharia law and the Muslim faith into our government. It does not belong in our government. This is what happened in Europe. And little by little, to try and be politically correct, they made this little change.

Cain's short statement was a litany of right-wing talking points, bigotry, and factual inaccuracies—a statement that should have raised a firestorm of criticism from left and right.

More disheartening than the actual comments was the actual response from the public and news media. We have seen many recent instances of anti-Semitic, homophobic, or misogynistic comments from talking heads or celebrities be punished heavily in the court of public opinion, and rightfully so. In those instances, jobs have been lost, fines have been levied, and careers have been derailed. In the case of Cain, there was hardly any outcry, and in fact, we saw his early poll numbers rise. Media outlets such as Fox News, who find any reason to be outraged, threw their support behind Cain, declaring him the "winner" of a recent televised debate.

Even though Cain is still considered by many to be a fringe candidate, many other high-profile Republicans have shared similar vitriol toward Muslims, with Donald Trump referencing a "Muslim problem" in the world, and Newt Gingrich comparing Muslims to Nazis on multiple occasions. Tim Pawlenty, Rick Santorum, and Michele Bachmann have also made disparaging remarks about Muslims, in light of the faux-shariah threat that has engulfed the political world.

In fact, prominent fringe talk-show host Bryan Fisher recently stated that Muslims are not subject to First Amendment rights, an extreme position to say the least. Rather than distancing themselves from Fisher's incendiary comments, many of the aforementioned candidates continue to appear on his radio show, pandering to his audience. Thankfully, my children are not old enough to understand the level of hatred that is being kindled in mainstream politics. Will they grow up amongst a public that hates them, based upon what faith they belong to?