Did Jesus Really Mean What He Said?

August 17, 2011 by Julie Davis
"Like" the Patheos Catholic Page on Facebook to receive today's best commentary on Catholic issues. 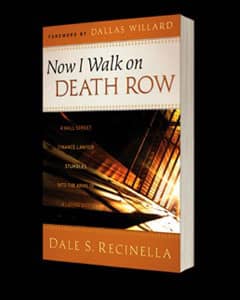 This book is like a ticking time bomb. It should come with a label: "Warning: asking God to show you the world as he sees it and yourself as he sees you may cause disorientation and soul searching. Read with caution."

Why did I put Now I Walk on Death Row by Dale S. Recinella in my review books pile? Death row ministry and an endorsement by Sister Helen Prejean smack of bleeding hearts and that's not really my cup of tea. Nevertheless, there it was when I looked for something new to read.

I always evaluate every book I receive by reading the first chapter. What had I seen in this one that earned it a place in the stack?

On the heels of the tirade, his pause seems louder than his words have been. The moment has come to respond. Sounding as neutral as possible, I ask the obvious question.

"Then how did you get here?"

He freezes, then steps back a half step, with his fists still firmly gripping the bars on either side of my face. My words have met an angry but open heart. . . .

He looks puzzled for a moment. Then he drops his hands to his side, muttering a stream of expletives punctuated by glances at me and the repeated phrase "crazy white whatever."

No wonder I kept it. Anyone who could use perfect logic to turn the tables on an age-old argument is someone who interests me.

Dale Recinella grew up in a Catholic family with not much money but all the right values. He witnessed his parents' super human efforts to care for a severely handicapped daughter, their love for the others, and their unflagging trust in God. As a young man, he became a talented lawyer and lost his way in the heady atmosphere of Wall Street, high finance, and 80-hour work weeks.

Much of this is familiar ground, although Recinella tells it well, but the story takes off into uncharted territory when Recinella meets his wife, Susan, a faith-filled woman who helps keep their relationship grounded in God. When their spiritual focus is waning due to the demands of daily life, Recinella hears a Gospel reading that hits hard. It is Jesus' encounter with the rich young man in Mark 10:17-15. Jesus tells him, "Go, sell everything you have and give to the poor, and you will have treasure in heaven. Then come, follow me."

Recinella and his wife ponder the reading, wondering if Jesus meant his words literally.

Susan shrugs. "Does anybody think He meant that? Does anyone take it literally?"

"Well, I guess priests and nuns do," I concede in acknowledgment of the well-known assumption by Roman Catholics for centuries that the literal Gospel only applies to those called to the so-called religious life—priests, brothers and nuns