Dumping My Assumptions about Mary

August 10, 2011 by Pat Gohn
"Like" the Patheos Catholic Page on Facebook to receive today's best commentary on Catholic issues. 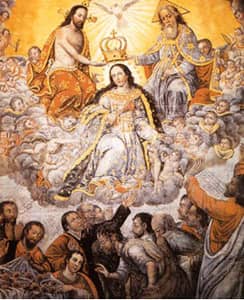 I once thought Mary irrelevant.

I am ashamed to admit that when I was a younger woman I had little use for the Blessed Mother.

I was raised Catholic, but when it came to Mary and Marian devotion, my post-Vatican II religious education lacked that punch. My Protestant friends, claiming to know the Bible better than I, had little respect for Mary beyond the historical footnote as being the mother of Jesus, and I believed them. Even some Catholics I knew dismissed Mary as just too "old fashioned" for the times. Stated plainly, Mary was no feminist icon.

Even worse, I had absorbed a subtle lie: if I imitated Mary, I would become weak, passionless, and boring—the antithesis of the modern woman. Mary was an old-school relic that had nothing to do with me. Little about her life was applicable to mine.

Then I became a mother.

My first pregnancy, sadly, was a miserable experience. I was sick, overwhelmed, and sick some more. For. Nine. Months. I could barely keep my head up and go to work each day.

My theories about strength, passion, and my remarkable destiny suddenly faltered. For those months, nothing about motherhood seemed "blessed" and I simply had no confidence for the task.

Hope came in the form of a dear Catholic friend. She was farther down the mothering road than I was, and definitely more mature in her spiritual journey. And she had joy.

She saw I was adrift and needed some real mothering, and an introduction to Mary was the solution. My friend taught me how to turn to the Blessed Mother in prayer. She told me that Mary "gets" me, even if I didn't "get" her. And that Mary "gets" motherhood, and would help me do the same. I had nothing to lose, except maybe my breakfast.

My friend didn't know it, but she handed me a lifeline when she handed me a little book of Marian prayers for mothers. That first pregnancy ignited my relationship with the Blessed Mother. And with each subsequent baby, I related to her more and more.

Mary is exceptional in every way. Yet, she is human, made of flesh and bone. Far from being disempowered, she had exactly the kind of power I needed more of! She's the kind of friend, sister, prayer partner, and mother I needed.

Turning to Mary as a young mom gave me a front-row seat to what it meant to live one's life for the sake of another: To pour your love into your family and the community around you—yes, to "mother" it. And that was a totally counter-cultural idea, and it grew on me. Or, rather, I grew into it. Having previously thought such nurturing activity would be an unfulfilling and unprofitable step away from all I had worked to achieve, I learned a new and more vital calculus from Jesus through Mary: real love is true when it is given with no guarantee of a return.

Far from being old-fashioned, Mary complements our modern idea of strong womanhood. Mary is, indeed, strong. She conversed with an angel, and submitted her life totally to God. She faced public disgrace and her beloved Joseph's quandary regarding a possible divorce. Mary gave birth in a place not conducive to comfort. She left her country, living as a refugee in Egypt; she stood by friends in need; she was a young widow. She walked the road to Calvary with her Son and stood beneath his cross. She mentored the Apostles in the ways of the Spirit at Pentecost. She embraced heaven.

Mary is, indeed, full of passion. She gave her body and soul to God with her fiat, and never looked back; she loved her husband and son and made a home wherever she was—in Nazareth, Bethlehem, Egypt, Jerusalem, and after the death of Jesus, with John, his disciple. She looked after Elizabeth, her older cousin; she interceded for a bridal couple in need of wine. She embraced the new wine flowing from the side of her Son on the cross.

Life with Mary is never boring. It leads to an ever-deepening union with Jesus: "My soul magnifies the Lord, and my spirit rejoices in God my Savior . . ." (Lk. 1:46-47).

You don't need to become a mother to understand all of this. You can take Jesus' word for it, and you can trust the Church's teaching on it, too.

Through Mary we see our own true destiny played out through her Assumption whereby she was assumed (or taken up) into heaven at the end of her earthly life, body and soul.

The Assumption is a singular grace afforded to Mary. It is related to her Immaculate Conception; she is the first person to be saved by Jesus. Mary did not undergo corruption at the end of her life, for she was sinless throughout it.