Excerpts from "Is God a Christian?" 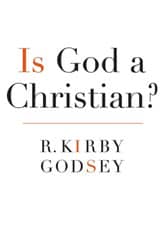 Selected excerpts from Is God a Christian?
By R. Kirby Godsey

Read more about this book and the author at the Patheos Book Club.

"My conviction is that no person and no religion can or should presume to lay exclusive claim to God. The God of all our gods is not to be possessed. The ultimate God of the universe, by whatever name God may be called, and the personal God, which we as Christians claim to know through the person of Jesus or which our Jewish forbearers may know through the readings of the Torah, transcends all our religious traditions. Our religions offer, at best, clouded images of God."

"You and I and all our human companions from other races and ethnic groups are not abstractions and we do not come from theoretical places. We are flesh and blood, composing history on a small and rather inconsequential planet orbiting a small star in a galaxy adrift among thousands of others. So, the future of religion is not a theological problem, it is a human problem. The very future of humankind is about nurturing new stories that will become the history of our future."

"For a long while I had this gnawing sense that there is more to this idea of God than anybodyʼs religion can ever tell us. I suspect that no personʼs religion is big enough to contain God."

"We need, more than ever before, to develop creative communities of conversation. Conversation does not begin with talking. It begins with listening."

Part I: Breaking Down Barriers

"Revelations are about the humanness of the divine and the divinity that is locked within our humanness."

"Religion is rarely the first light of grace. At its highest the practice of religion is a celebration of the fact that above all else, we are children of grace."

Chapter 2: The plague of certainty

"We have to let go of our religious certainty long enough to find the courage to entertain strangers. If we do, like Abraham, we may actually dine with an angel of God."

"In truth the devotees of all of the worldʼs religions need to let go of the plague of certainty. We are not people of certainty; we are people of faith."

"Human religions, including Christianity, have a habit of trying to bring God down to size."

"Religious fervor can become the enemy of spiritual maturity."

"Fear has been the chief culprit in turning good religion into bad."

"The world no longer trusts Christians to be Christian."

"I believe that we will confess our faith with greater integrity if we can find the courage to confess our uncertainty."

"On occasions, you see, the practice of our religion causes us to lose touch with the intersection of believing and living. That intersection, more than the catacombs of our religious doctrines or the hot debates, is where meeting God matters."

"Uncertainty and doubt can indeed become the growing edge of our faith. Uncertainty can become the crucible in which we learn to listen and learn from one another."

Chapter 3. The Peril of Exclusivity

"Every person is a word from God that has never before been spoken and will never be spoken again in exactly the same way."

"Exclusionary religion turns religion itself into a pagan idol."

"Jesus called upon us to wake up to our inner connection with God, to the kingdom of God within. Our being here, the being and presence of another person and the presence of God are all irrevocably intertwined."

"We do not enrich our faith by declaring the invalidity of anotherʼs belief."