Lydia: With Briefcase and Laptop

August 16, 2011 by Kathy Coffey
"Like" the Patheos Catholic Page on Facebook to receive today's best commentary on Catholic issues. 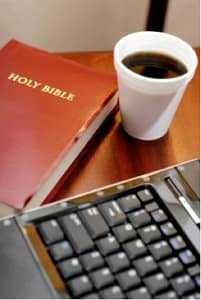 Did you ever wonder to whom St. Paul wrote these inspiring words?

I am confident of this, that the one who began a good work among you will bring it to completion by the day of Jesus Christ. (Phil 1:6)

Whatever gains I had, these I have come to regard as loss because of Christ. ( Phil. 3:7)

You may not have pictured a successful businesswoman, but Lydia led the group who first received the letter to Philippians.

Paul and Silas had initially met her on the Sabbath, outside the city gate of Philippi by the river. After the noise and tumult of town, they must have sought a restful oasis for droopy spirits and tired preachers. This scene in green shade was peaceful beside the liquid silver of the stream. The disciples needed a quiet place for prayer, and they found a group of women hospitable to their message. What began as a chance (or graced) encounter led eventually to a community Paul described as "my brothers and sisters whom I love and long for, my joy and crown" (Phil. 4:1).

They may remind us of many spirituality groups gathered today: coming before work or during lunch hour, dressed in professional clothes, tight on time but eager for meaning and depth. They study the Bible or contemporary authors like Rohr, Rupp and Rohlheiser. Discussion is lively; with no time to waste, they cut to the chase. There's little tolerance for pious platitudes, and a genuine thirst for a more prayerful, compassionate, Christ-centered way of life.

So too, Philippi was located on the Greco-Roman trade routes and must have been a bustling place. Lydia was an influential and successful merchant; she probably sold her purple textiles to the Roman imperial family. But being "a dealer in purple cloth" wasn't enough for Lydia. She thirsted for more. The author of Acts records, "The Lord opened her heart to listen eagerly to what was said by Paul" (16:14).

She must have liked what she heard. Did the Christian message spill into her thirsty spirit like the waters of the stream? We can only imagine why this bright, forthright woman responded so quickly. But we know that she and her household were baptized at once.

It's heartening to know that Jesus speaks not only to the marginalized, for whom he had a special fondness. But he appeals as well to the prestigious. The educated and probably affluent magi came to his crib as well as the poor, bottom-of-the-social-heap shepherds. He drew not only the diseased and ostracized but also the prosperous.

And Lydia responded generously. After her baptism, Paul and Silas were jailed. Later freed by a violent earthquake which loosened their chains, they went straight to Lydia's house. She must have welcomed them with a radiant party. The Christians gathered to hear the remarkable story, and after prison, the disciples must have appreciated a fine meal, luxurious table cloths and good wine.

Like us, the Philippians lived with many distractions. In a trade center, it's easy to get caught up in negativity, greed, or competition. Lydia helped the early Christians keep their focus on what mattered. So Paul could say of her and of them all: "in the midst of a crooked and perverse generation...you shine like stars" (Phil. 2:14).

Any skilled writer imagines his or her audience because it affects theme and word choice. Writing his famous letter, Paul might have pictured Lydia the first day they met: eyes gleaming, interest kindled, dappled light reflecting off the river onto her purple shawl.

Lydias live all around us: beneath sleek coiffures and designers suits are shrewd minds, hearts eager for truth and spirits yearning to serve. God's gracious welcome extends to the MBAs as warmly as to pre-schoolers.

So next time you see the purple vestments of Advent or Lent, remember Lydia.

This piece previously appeared in St. Anthony's Messenger. Reprinted by permission of the author.