So, here is the cultural narrative that I often hear: Conservative Christians want to impose their values on our schools. Everyone else prefers an information-based education that relies on the power of knowledge to inform life choices, but those choices belong to the individual.

The narrative is simple, clear, and easily falsified.

To be sure, some conservative Christians (though not all) are interested in shaping the curriculum of our schools and with it the values our children are taught. And there are certainly others who advocate for a values-neutral environment.

The problem with this narrative, however, is that there are people out there advocating for values-based education who are not Christian conservatives. The best and most obvious example is also the most recent, because it has so-called liberals, as well as conservatives troubled: Sex education in New York.

For the first time in nearly two decades, students in New York City's public middle and high schools will be required to take sex-education classes beginning this school year, using a curriculum that includes lessons on how to use a condom and the appropriate age for sexual activity. The new mandate is part of a broader strategy the Bloomberg administration announced last week to improve the lives of black and Latino teenagers. According to city statistics, those teenagers are far more likely than their white counterparts to have unplanned pregnancies and contract sexually transmitted diseases. "It's obviously something that applies to all boys and all girls," said Linda I. Gibbs, the deputy mayor for health and human services. "But when we look at the biggest disadvantages that kids in our city face, it is blacks and Latinos that are most affected by the consequences of early sexual behavior and unprotected sex."

The article goes on to note:

For the Bloomberg administration, which last week announced a three-year, $130 million initiative to improve the lives of young minority men in the city, the sex-education mandate joins a number of other public health efforts—like the mayor's push to reduce residents' intake of salt and sugary sodas—that have sometimes been criticized as interventionist. It is also unusual because the city does not often tell schools what to teach.

So much for the prevailing cultural narrative. Plainly, there are no small number of people who aren't motivated by religion at all, but who have views of the world, social harmony, and human happiness. It is equally clear that many of the same people advocate for their views and make an effort to impose them on others. In fact, when the mayor of New York can tell you what to do in bed, how much sugar you should have, and what your sodium levels should be, it isn't even clear that conservative Christians have managed to corner the market on social control. 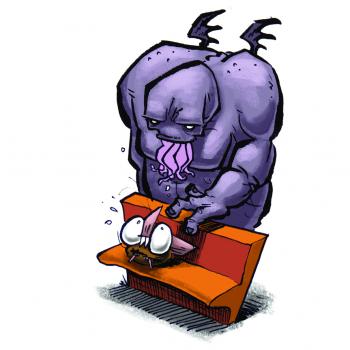 Frederick Schmidt
Frederick W. Schmidt is the author of The Dave Test: A Raw Look at Real Life in Hard Times (Abingdon Press: 2013) and several other books, including A Still Small Voice: Women, Ordination and the Church (Syracuse University Press, 1998), The Changing Face of God (Morehouse, 2000), When Suffering Persists (Morehouse, 2001), in Italian translation: Sofferenza, All ricerca di una riposta (Torino: Claudiana, 2004), What God Wants for Your Life (Harper, 2005), Conversations with Scripture: Revelation (Morehouse, 2005) and Conversations with Scripture: Luke (Morehouse, 2009). He holds the Rueben P. Job Chair in Spiritual Formation at Garrett-Evangelical Theological Seminary in Evanston, IL, and directs the Job Institute for Spiritual formation. He is an Episcopal Priest, spiritual director, retreat facilitator, conference leader, writer, and Consulting Editor at Church Publishing in New York. He and his wife, Natalie live in Chicago, Illinois. He can also be reached at: http://frederickwschmidt.com/
Get Patheos Newsletters
Get the latest from Patheos by signing up for our newsletters. Try our 3 most popular, or select from our huge collection of unique and thought-provoking newsletters.
From time to time you will also receive Special Offers from our partners that help us make this content free for you. You can opt out of these offers at any time.
see our full list of newsletters