The Sins That Sabotage Divine Love: An Overview of "The Betrayal of Charity" 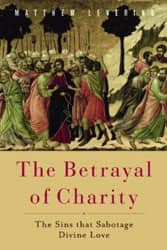 Love was at one time a powerfully unifying force among Christians. In his letters, Paul consistently evokes charity as the avenue to both human and divine communion. If the magnitude of charity was of the upmost importance to early Christians, so were those sins that aimed to distract Christians from acting based on love. Taking seriously the efforts of Paul, and later Thomas Aquinas, to expose and root out the sins against charity, Matthew Levering reclaims the centrality of love for moral, and in fact all, theology.

As Levering argues, the practice of charity leads to inner joy and peace as well as outward mercy, good will, and unity with God and neighbor. The sins against charity-hatred, sloth, envy, discord and contention, schism, war and strife, and sedition and scandal-threaten love's concrete effects by rebelling against dependence on God and undermining interdependence on others. The Betrayal of Charity seriously considers the consequences of each of the sins against love, compelling individuals and communities to recognize their own loss of charity. In doing so, Levering fosters a spirit of restoration and reminds readers that love-not the sins against it-will have the last word.

"Levering is by now at the forefront of the younger generation of Catholic theologians in America. The Betrayal of Charity provides a profound treatment of particular patterns of sin together with a proper placement of those patterns within the grammar of love. A lovely and intellectually stimulating book."

"The Betrayal of Charity is spirited and engaging. Levering addresses very worthy interlocutors-including Hays and Schwartz-and gives them a good run for their money."

Matthew Levering is Professor of Theology at the University of Dayton and a Distinguished Fellow of the St. Paul Center for Biblical Theology. His most recent publications include Jewish-Christian Dialogue and the Life of Wisdom, Christ and the Catholic Priesthood, Participatory Biblical Exegesis, and Biblical Natural Law. He lives in Dayton, Ohio.

Read an interview with Matthew Levering at the Patheos Book Club here.