Spiritual Lessons from a Black Bear

Editor Note: This article is part of a summer series entitled "Spiritual Lessons I Learned On Vacation." 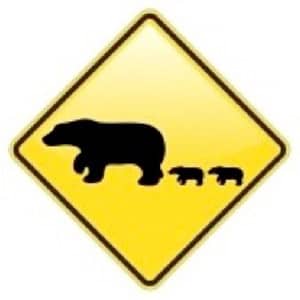 Recently, I went hiking with my husband in Colorado in an aspen forest near Vail. It's been hot in Dallas this August, and I was counting my blessings to have a few days in a cooler climate. I had worn a Columbia "adventure hat" I bought at a sporting goods store. I had slathered sunscreen all over face, neck and arms. I had sprayed bug spray on my ankles, neck, wrists, and even the brim of my hat. I had brought a bottle of water and a zone bar. I had taken every precaution to guard against sunburn, bug bites, dehydration and hunger.

There was one danger I had apparently forgotten, though: about two miles into the hike, I came upon a sign that said "Warning: Black Bears in the area."

I stopped and looked at the sign, thinking that it would have been good to know that at the beginning of the hike. Or maybe not. In some cases in life, it may be a good thing that we don't know exactly what we're getting into, because we might never take the risk. I'll leave it to you to come up with your own examples.

Maybe it would have been better to look that up before I started the hike.

If I had, I would have found out some invaluable information about black bears and tips on what to do when you meet one. I did just that as soon as I got back to my room.

I found out that that "black bears populate forests in North America, and frequently climb trees." I thought, "Isn't that cute! I used to like to climb trees, too, when I was a kid." I read on.

"They generally fear you more than you fear them and will do anything to avoid humans. But sows, during the breeding season and while raising their cubs, can be dangerous since their behavior will be erratic and dangerous if they detect a danger to their babies. Otherwise, black bears are generally wary, timid and retiring, and try to avoid or escape human beings. They are predominantly herbivores."

As I continued reading the website, I learned that bear confrontations can occur in any setting, from towns to isolated country. Although nothing will guarantee your safety in bear country (their one predictability is their unpredictability), knowledge of bears and proper behavior will reduce your risk.

Still, I read on. "In all instances," said the website, "if you see a bear, leave. Walk backwards at an angle. Do not disturb it. Always leave the bear an escape route. Don't panic or look the bear in the eyes. He perceives your eye contact as a threat. The bear will stand on its back legs, sniffing the air to analyze his situation. (He has bad eyesight but is a keen "sniffer.") He may "eye" you intently. Once he identifies you as a human, he will leave."

This seems like a lot of details to keep in mind. What if I forget and look the bear directly in the eyes, while walking toward it in a threatening manner?

"Pepper spray made from the juice of red hot peppers is a bear deterrent, incapacitating him and teaching him a lesson. Use it at six to eight yards.

Yes—and what kind of lesson would that be? Don't mess with homiletics professors? Besides, I thought I was supposed to be walking backwards at an angle without making eye contact. How does the pepper spray maneuver come in?

"Do not feed bears. Feeding them makes them 'food-conditioned.' A fed bear is a dead bear, according to John Hechtel, a biologist in Alaska who studies bears. He notes that 95% of food-conditioned bears eventually become nuisances and must be killed."