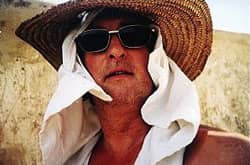 My books have a contrarian flavor: profiles of entrepreneurial scientists in the Soviet Bloc (Communist Entrepreneurs: Unknown Innovators) when the popular view was one of technological incompetence in the communist world; Muslim-Christian harmony (2006 French Siloe Prize winning Monks of Tibhirine: Faith Love and Terror in Algeria) when people were touting irreconcilable differences between Islam and the West, and now Commander of the Faithful: A Story of True Jihad. Abd el-Kader was a man of deep faith combined with chivalrous humanism and intellectual openness that made him a hero in both the East and West. Commander of the Faithful is the third book of an Abrahamic trilogy that began unwittingly with Stefan Zweig: Death of a Modern Man (1995). (Visit the Patheos Book Club for more conversation on Commander of the Faithful.)

Zweig was one of the most prolific and widely read writers of the 1930s and 1940s. I loved both his fiction and non fiction. For beginners, I would recommend Beware of Pity which ranks with the best Russian novels. Joseph Fouché, is a brilliant biography of a power hungry, ex-Jesuit who, as Police Minister, was one of the most politically astute and cold-blooded opportunists in Napoleon's government. I became perplexed by Zweig's suicide in 1942, living safely in Brazil, wealthy, world famous and with young new wife. Still read in Europe, Zweig today is virtually unknown in the United States. This book is only available commercially in French (University of Toulouse Press)

Reflecting back, I have come to realize these books have a common thread. Indirectly, they are about the role of faith, or its absence, in guiding and sustaining people in desperate times.

Other writings by Kiser related to Algeria

"The Algerian Microcosm: Monks, Muslims and the Zeal of Bitterness," Cistercian Studies Quarterly (38:3) 2003

From Russia to Writing:

The first time I wrote for the sheer pleasure of writing was after I returned from traveling across the Soviet Union in 1969. The trip was a graduation present to myself after finishing an MBA at the University of Chicago. I became fascinated by Soviet culture, the diversity of people, their friendliness toward Americans, and their great knowledge of American literature. The complete absence of a commercial mentality was both refreshing and sometimes frustrating, especially in restaurants. My observations on everything from Russian play on the beach to their habit of starting breakfast with offerings of vodka and cognac were translated into vignettes which I read for friends-my unpublished Russian Reminiscences. I wanted to somehow put Russia on my career path.

My newly found interest in Russia was followed by a detour. America was burning-race riots and Vietnam had plunged the country into turmoil. The University of Chicago was in a war zone. I decided to get involved at home before launching myself into foreign adventures. HUD's Model Cities Program became my vehicle to do service for my country. Model Cities sent large chunks of discretionary money to cities crying for help, and sent me to Tuskegee, Alabama. After two years in Tuskegee's Model Cities program I went back to Chicago to "do consulting" using my vast knowledge of on-the-ground realities of federal grant making.

Then, my Russian siren called me. I returned to Washington where I had moved after business school. I was studying Russian and found myself writing inflammatory articles for Foreign Policy Magazine saying that the Russians had advanced technology and American companies were buying it.

I was contracted by the US Department of State to investigate, document, and explain this "reverse technology flow" phenomenon from the USSR and Eastern Europe. For four years, I sleuthed, interviewed, and finally wrote reports that provided the first comprehensive documentation of the deal flow of Soviet bloc technology to the US, mostly as intellectual property rights: patents and trade secrets. In 1980, I founded Kiser Research Inc to probe the commercial secrets of the communist bloc. We helped industry to put Russia and Eastern Europe on the map as places to seek better or cheaper mousetraps, and acted as midwives in the process. But my heart was never in technology but rather going into the unknown. I am not really a techie, but a liberal arts student with a penchant for history and languages (BA History, University of North Carolina; MA History, Columbia University). I like creating bridges to different cultures and subcultures. My first book, Communist Entrepreneurs, described how creative minds succeeded in the communist system, where its deficiencies were often prods to innovation.

After fifteen years and too much traveling, I needed a change and so did my wife. In 1994, I took my family to Nice in France for a year of bathing in French culture, the subject of a book yet to be written. My French sabbatical led me to a change of life style. I turned over Kiser Research to my colleagues and have since focused my life on writing and raising pigs.

Author Q & A from themonksoftibhirine.net

Patheos Book Club on Commander of the Faithful.