September 22, 2011 by Elijah Davidson
"Like" the Patheos Evangelical Page on Facebook to receive today's best commentary on Evangelical issues. 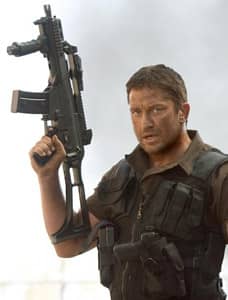 Machine Gun Preacher is the based on a true story of Sam Childers, an ex-con who becomes a Christian and then travels to the Sudan to build an orphanage and rescue children from genocide, often by force. The film is about his struggle both to rescue children and to involve other people in his work.

Sam's methods are controversial, because unlike other foreign aid workers, Sam isn't opposed to using violence to achieve his means. The film is full of scenes of Sam shooting rocket launchers and sniper rifles at Sudanese militants. It is also full of scenes of Sam pounding on bankers' desks and railing against what he sees as a lack of concern for the children of Sudan among the American middle class.

Machine Gun Preacher is a difficult film, because while it is easy to applaud Sam's concern for the weak and helpless, it is hard to approve of his way of helping them.

There is an urgency to Machine Gun Preacher worthy of its title. It does not let up for all of its two hour-plus run time. It is also as uncomfortably preachy as one might expect, though that doesn't mean we don't need to hear its message.

The film harshly judges American Christians for being more concerned about their own comfort and security than they are about the people in the world who need help. The film also admits, though, that the worlds of American Christians and Sudanese dispossessed are different worlds, and people living in both places have to be concerned about different things. The film also doesn't necessarily approve of Sam's methods, but it does ask its audience the question, "What are you doing instead?"

Global consciousness is a burden as much as it is a blessing. Through our interconnectedness, we can see and experience the horrors that happen in remote parts of the planet. Seeing them, we are faced with a crisis of responsibility. In the affluent Western world, we can even travel and see first-hand what is happening, forever binding us, if we allow ourselves to be bound, to that place. Through technology, we have achieved an ersatz, God-like omniscience of global events. Unfortunately, we have not yet achieved a similarly God-like omnipotence to influence and correct what is wrong.

I am challenged by Sam's refusal to sit by as people are being slaughtered in the Sudan. I am humbled by his lived-out love for the children there, even if I do not necessarily approve of his methods. But I cannot commend his tendency to do everything on his own. He ought to include at least his family in his struggle, if not in the fighting, at least in the care for both the children and himself. Gunslinger-like independence can sustain an audience's interest for a couple of hours in a theater, but as a way of life, it is unsustainable. Sam needs his community.

Similarly, I think our communities are the only answer we have in dealing with the burden of knowing what is happening around the world. We cannot fix everything on our own. We must reach out to each other to help fix what we can and to give to God what we cannot. We cannot forget that God is great and trust God to do what we can't. As Nehemiah instructed the re-builders of Jerusalem's walls, we ought to "remember the Lord, who is great and awesome, and fight"—whether we fight with bandages or bandoliers.