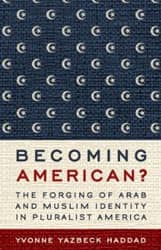 Becoming American? The Forging of Arab and Muslim Identity in a Pluralist America
By Yvonne Yazbeck Haddad

For over a century, immigrants from the Arab world have prospered in the United States. They have "made it" by working hard, carefully shedding their particular cultural distinctions, compromising, and blending in. They have not, as yet, been welcomed as a group into the American mainstream. The Christians among them who have achieved leadership positions, even as elected governors and senators, mostly abandoned Eastern Christianity, whether Orthodox, Melkite, or Maronite, and joined mainline American churches. Many Muslims question whether the price of belonging in America is contingent on the renunciation of Islam. They are still waiting to be accepted on their own terms into the American definition of its constituent faith communities.

From the outset, officials in various agencies of the American government raised questions about Muslims' fitness to qualify for citizenship in America based on issues of race and color.[i] Spooked by the influx of large groups of immigrants (predominantly from southern and eastern Europe) during the first two decades of the twentieth century, the American public appeared less inclined to welcome Middle Easterners. Helen Hattab Samhan, deputy director of the Arab American Institute, notes that "a judge in South Carolina ruled that Lebanese immigrants even though they may look white, they are not that particular free white person" designated by the 1790 Act of Congress and hence not worthy of citizenship.[ii] After a decade of legal debates, the American courts ruled that they qualified as white and were therefore able to become citizens.

In the post-World War II period, when the United States was reinventing itself as a pluralistic society, immigrants from the Arab world found themselves publicly and deliberately excluded from the mainstream of American politics. Helen Hatab Samhan writes about their experience: "In the present period, anti-Arab attitudes and behavior have their roots, not in the traditional motives of structurally excluding a group perceived as inferior, but in politics." She indicates that the political nature of this racism was rooted in the Arab-Israeli conflict, since those who supported the Palestinian cause were subjected to this exclusion whether or not they were Arab-Americans.[iii] "It has been not so much Arab origin as Arab political activity in America that has engendered a new form of 'political' racism that takes prejudice and exclusion out of the arena of personal relations into the arena of public information and public policy."[iv] This political exclusion was propagated by their political rivals, the American Jewish organizations, who tagged Arab-American activists as an "artificial constituency," a sort of illegitimate group of foreign agents undermining Israel.[v] This eventually brought a variety of government agencies, including the CIA, the INS, the FBI, the IRS, the Department of State, and the United States Customs Service, to coordinate monitoring the Arab-American community in an effort to ferret out terrorists and intimidate the community, weakening its effectiveness and scaring off its allies and sympathizers.[vi] Not one instance of a violation of U.S. laws was uncovered.[vii] "In the situation of Arab Americans today, exclusion from ethnic politics (i.e., acting as a constituency) is not so much by ignorance or prejudice as by political design. And because Jewish Americans are their main 'adversaries' and can recall their own past victimization (anti-Semitism), the Arab Americans in their exclusion often emerge as the villains."[viii]

The 1990s witnessed an increase in hostility toward Arabs and Muslims in the United States. The hostile atmosphere appears to have been encouraged by several interests, including the conservative wing of the Republican Party, the religious right, the pro-Israel lobby, and leaders of autocratic Arab states. Events overseas precipitated measures that led to racial profiling and targeting of Arabs and Muslims, along with a growing atmosphere of hostility towards Islam. An act of Congress, a decision of the Supreme Court, and a presidential executive order legitimated the incarceration of Arabs and/or Muslims using secret evidence. In a sense, they were treated as different from other citizens of the United States since they were denied the basic presumption of innocence until proven guilty. Thus, at the beginning of the twenty-first century, the United States, once again, seemed to be questioning whether the members of one group have the same rights as other citizens. This time the discrimination was based not on color or political affiliation, but rather on the perennial fear of the Saracen and the commitment to an Islamic ideology.