A Compassionate Future: An Interview with Karen Armstrong 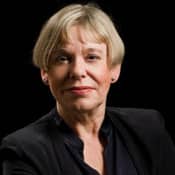 Three and half years ago, religious thinker and author Karen Armstrong created a Charter for Compassion, a document that sought to activate the Golden Rule around the world and restore the principle of compassion to the center of morality and religion. Since it's launch in November of 2009, more than 76,000 people have signed and affirmed the charter.

In her latest book, Twelve Steps to a Compassionate Life, Armstrong suggests actions that one might take to increase the compassion in one's daily life. Patheos contributor Susan Baller-Shepard spoke with Armstrong recently about her plans for the charter and why, in a post-9/11 world, it's more important than ever to join communities of compassion.

Note: To learn more about the charter, visit the website here.

What makes 2011 the time to embrace the Charter for Compassion?

9/11 was a revelation of the dangerous polarization of our world; it revealed the deep suspicion, frustration and rage that existed in some quarters of the Muslim world and also the ignorance and prejudice about Islam and Middle Eastern affairs that existed in some quarters of the West—emotions that no society, and certainly not the global community, can safely ignore. Unless we learn to treat all peoples, whatever their ethnicity or ideology, as we would wish to be treated ourselves, applying the Golden Rule globally, we are not going to have a viable world. The ten-year anniversary of 9/11 is a timely reminder of the urgency of our situation.

Has anything unexpected occurred with the Charter?

The fact that businessmen and women are carrying forward the Charter is something I never expected. They know how to strategize and think practically. That has been a great addition.

I would like to see more and more cities joining our network of compassionate cities so that we start to create a compassionate network worldwide and begin to change the mindset of people in that city.

Who has embraced the Charter in ways that have surprised you?

The great event of this year has been the energy with which Pakistan has embraced the Charter a people who are on the frontline of the dangerous divide in our world, and yet they have really taken the lead. This should be an inspiration for us all. The Pakistani team is working practically and with urgency. The young people are especially hungry for something new.

What key organizations or institutions are you hoping will embrace the Charter?

We have had great help from the Fetzer Institute and, of course, TED (a non-profit devoted to Ideas Worth Spreading) has been a wonderful support and source of energy. Next month I am going to Seattle for a fundraiser for the Charter, because if we want to implement all our programs and projects, we need funds. So—fingers crossed!

What events have happened since the inception of the Charter that assures you of the importance of its message?

I think the fact that the Charter has taken off in a way that none of us expected shows that it is an idea whose time has come. The fact too that it has taken on a life of its own—with the help of business people, for example—and in regions such as Pakistan and the Middle East, which I longed for but didn't dare expect, makes the same point.

What can people look forward to with the Charter in this next year?

Watch out for the Cities Campaign. We now have over fifty cities embarking on the process to become a City of Compassion, which doesn't mean that they have already become a compassionate city but that they are working practically, realistically and creatively to implement the Charter in the difficult conditions of the 21st century. Keep up to date by checking on the website, which is going to be revamped to reflect up-to-date news of the Charter worldwide.