Embracing Christ and the Cross: Our Lady of Charity 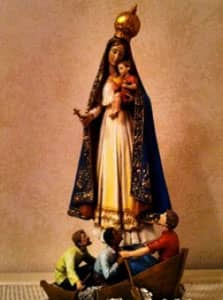 She is a woman with maybe a million titles—some majestic, some courtly, some theological, some regional, and some lovingly familial.

Depending on where in the world you live or visit, you probably know one that engenders devotion too. Every version of her name blesses both her and the people who prayerfully call upon her unceasing maternal intercession and protection. No worries, the Blessed Virgin Mary answers to them all!

Today, the Roman Catholic Church honors Mary—who mothers us all—on her birthday, the Nativity of the Blessed Virgin Mary.

Meanwhile, important anniversary celebrations in Florida, Cuba, and perhaps elsewhere, honor her today as the Patroness of Cuba, Our Lady of Charity. Her full title in Spanish is La Virgen de la Caridad del Cobre.

I have long held a devotion to Mary. Thanks to my friendship with a few Cuban-American families, I have recently adopted this title, Our Lady of Charity, into my prayer. Even though I come from a different ethnic background, I have been moved by my getting re-acquainted with the Mary I know and love, and venerating her anew under this title.

I have been duly struck—but not surprised—by Mary's effectiveness in uniting the people of Cuba under her patronage. Our Lady of Charity also unites the many Cuban exiles of a 50-plus-year diasporathat followed the stormy rise of the Castro regime in that island nation.

But then again, Our Lady of Charityseems to specialize in making appearances to people experiencing storms.

In 1612, three young men in a tiny boat in the Bay of Nipe, off the coast Cuba, attributed their safety in a violent storm to Mary. Nicknamed "the three Juans," they were two brothers, Rodrigo and Juan de Hoyos, and a slave, Juan Morena. While they were offshore collecting sea salt, a storm blew up causing them to pray for safety. Their prayers were answered, not only with a calming sea, but also with a gift found floating on the water—a statue of Mary holding the Child Jesus. An inscription read: "I am the Virgin of Charity."

The unique image displays the Virgin holding the Child Jesus close to her heart with her left arm, as he holds a small globe in one hand and extends a hand of blessing with the other. Mary's right hand extends a small gold cross.

Mary's holding of a cross is unique to this image, as far as I know, and two things impress me about it.

In the first place, when I see Mary's action in holding out this cross, I see a mother gently schooling her young Child in the ways of charity. At the same time, she prophetically points to the future reality of Good Friday in the life of Jesus, the cross he would bear to win our redemption. For Mary, it is also a sign of a coming pain to be borne, the very "sword" that would "pierce through her own soul" (Lk.2:35) as her maternal love would suffer with Jesus at the Crucifixion.

Secondly, Mary embraces both the Christ and the cross. She, the perfect disciple, demonstrates the posture for the good Christian life. We are to entrust ourselves to Christ, holding him close, while living lives of unrelenting charity, as emphasized by cross—the ultimate symbol for the depths of charity. Jesus said, "Greater love has no man than this, that a man lay down his life for his friends" (Jn. 15:13 RSV-CE).

It has been almost 400 years since "the three Juans" hauled Mary's statue from the bay and rowed home to their village. The small statue and its story sparked devotion to Mary throughout the island for the last four centuries.

Cuba, then as now, is a multi-racial nation. People are drawn to this patroness whose skin tone appeared to be of someone of a racially mixed heritage. Many credit devotion to Our Lady of Charity's patronage as assisting the movement to bring an end to slavery in Cuba in the early 1700s, the seeds of which freedom were planted after the copper mine in El Cobre shut down in the years following Mary's placement in a chapel nearby. More recently, in the early 20th century, veterans of Cuba's War of Independence against Spain petitioned then-Pope Benedict XV to declare Our Lady of Charity the official Patroness of Cuba, which he did, in 1916.

Today, the image is enshrined in a basilica dedicated to Mary, the Basílica Santuario Nacional de Nuestra Señora de la Caridad del Cobre, near the city of Santiago de Cuba.