"You need to find your Kali side," I told Annie. You may know someone like Annie. She's a production manager at a local TV station, a single mom with a busy schedule, and a really nice person. She values yoga as a doorway into peace and well-being, teaches it to troubled teens, and always stresses the importance of equanimity and other yogic virtues—non-violence, surrender, contentment, detachment.

But Annie's approach to yoga is like her approach to life: she is so conflict-averse that its hard for her even to admit that she has negative feelings. She rarely raises her voice, and she once told me that she can't remember the last time she felt anger. But at this moment, mired in a family conflict that involves missing money, elder abuse, and shady lawyers, Annie senses that her carefully cultivated tendency to seek peace over conflict is not helping her. She's called me for advice: she wants to be told how to keep a good relationship with her brother and sister and still stop them from cheating her mother out of her property. In other words, she wants me to give her a prescription for non-violent conflict from the yogic playbook.

Instead, what pops out of my mouth is, "You need to find your Kali side."

My intuition was that Annie needed not so much a rational argument as an image, something to bypass the cultural conditioning of her left-brain dominated mind. Annie, like so many people who practice yoga, had a half-conscious tendency to confuse "being yogic" with being nice. Not that kindness and equanimity aren't essential yogic qualities. It was just that people close to Annie often noticed that her practiced yogic calm looked like a way of papering over difficult emotions, knotty feelings, and desires that felt dangerous, or at least not socially acceptable.

She had yet to recognize that even though in the West we tend to privilege the calming, rejuvenating and stress-reducing aspects of yoga and spirituality, yoga is also a path to bringing out, then taming and channeling, our wildness. To go deep into yoga will not just calm down or induce well-being. It will also at some point ask us to confront those parts of ourselves that may have been suppressed by fear, trauma, or social conditioning, and which may be shutting down our joy, undercutting our confidence or our passion, sabotaging our health. To bring forth our repressed passion and purify it into pure energy, or give us access to a transpersonal level of anger and wisdom that when owned and channeled can renew our bodies and give us the power to act skillfully—these are some of the hidden gifts that the yogic spiritual technology can offer. Hidden in texts like the Hatha Yoga Pradipika or the Shiva Samhita, strewn through the texts of tantra, are verses on deity yoga, verses that are not just casual meditation, but point to one of the most powerful known technologies for unlocking our hidden powers.

Deity yoga is a path that uses "forms"—images, mantras, ritual, and simple invocation of the Hindu and Buddhist deity figures—to touch and become familiar with different aspects of the transpersonal divine. Hinduism is an immensely sophisticated approach to spirituality that encompasses worship traditions for people at every level of consciousness, from the superstitious to the subtlest level of philosophical and ethical understanding. Deities—the Sanskrit word is "deva," meaning "shining ones"—are light forms who represent qualities of the divine. The Indian tradition recognizes the Absolute both as vast, impersonal awareness/love, but also understands that the absolute can take forms. And these deity forms are present both in the collective consciousness and in our personal consciousness, which is why Deity Yoga can have such important psychological effects.

In Jungian language, a deity image is an archetype, a personification of qualities deeply embedded in the human. The archetypes are the underlying forces in human life, which all of us tap into in our most primal human moments—for instance, as parents, as lovers, as soldiers, as students or teachers. Deities are archetypes of higher, transpersonal forces, forces that may not be accessible to us, but which are embedded within the psyche nevertheless. Yogic practice has always offered practices for tuning into these archetypal forces. For example, the statues and pictures in yoga studios and Buddhist temples are not just as decoration, but meditation aids, focal points for ritual, and as reminders of powers that we hold within. When someone waves incense in front of a stature or picture, you might think of this as weird or (especially if you were brought up Jewish) idolatrous, and reject him or her. Or you can approach ritual, mantra, and especially the powerful practice of directly invoking a deity energy, as a way of opening yourself to energies within yourself, powers that can support, protect, and act with a kind of numinous power.

Are you afraid to tell others that you are a Christian?
David Rupert
2

Veneration of Saints: God "In" and "Through" St. Paul
Dave Armstrong
3 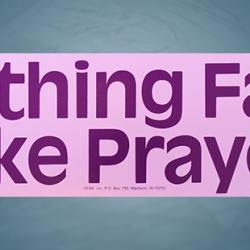 Change The World With Kindness, One Person At A Time
Shaunti Feldhahn
Get Patheos Newsletters
Get the latest from Patheos by signing up for our newsletters. Try our 3 most popular, or select from our huge collection of unique and thought-provoking newsletters.
From time to time you will also receive Special Offers from our partners that help us make this content free for you. You can opt out of these offers at any time.
see our full list of newsletters
Editor's picks See all columnists