A Good and Perfect Gift: A Q and A with Amy Julia Becker 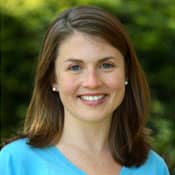 A Good and Perfect Gift is more than just a narrative that spans the first two years of Amy Julia Becker's new life with Down syndrome. From the initial dark moments in the hospital to the light and laughter Penny brought into the family, it is a story of a remarkable little girl who surpassed expectations. It is the story of a young couple coming to terms with their first-born child being different than they anticipated, and eventually receiving that child as a precious gift. Here, Amy Julia reflects on being a mother to a daughter with Down syndrome.

(To read an excerpt from the book, visit the Patheos Book Club here.)

Now that you've had a child with Down syndrome, will you test for the disorder/chromosomal abnormalities with future pregnancies?

Even though I was only 28 when pregnant with Penny, I did prenatal screening tests without thinking about their implications. As it happened, those tests didn't pick up Penny's Down syndrome. With William, our second child, I did one screening test, but I felt uneasy about it. We just had our third child, Marilee, and I didn't do any prenatal screening during that pregnancy. My husband and I would welcome another child with Down syndrome (or another disability) into our family so the only testing we wanted was that which might indicate physical abnormalities that might need immediate medical attention. By then I had realized that I didn't need to know ahead of time if our child had a disability. Although I was shocked when we discovered Penny had Down syndrome, I was grateful we hadn't known in utero. We had been able to prepare for our child, not for a diagnosis. In addition, we were wary of participating in the prenatal screening industry. Although many individual women use prenatal screening as a way to prepare for the birth of their child, the industry as a whole perpetuates bias against children with disabilities. I didn't want to participate in a cultural assumption that certain children are more "worthy" of life than others.

What kind of mother would you have been if Penny had not been born with Down syndrome?

I suspect I would have cared a lot more about my children's achievements and less about their character. I like charts and graphs and predictions, but Penny didn't show up on the charts for typical babies. I had to let go of any expectations I had formed about who she ought to be and instead learn to receive her as who she is. At the same time, I experienced freedom as a mother because there was suddenly less societal and self-imposed pressure to be "the perfect mom." I learned that my value as a person is not dependent upon my child's ability to achieve. The funny thing is, what I've learned as a parent to a child with a disability is equally important and relevant in raising all our children. With all three of them, I need to be careful not to impose upon them my idea of who they should be and instead look for ways to encourage them to grow into who they already are. That's not to say that I don't play a role in shaping them, but rather that the role I play has more to do with responding to their strengths and encouraging them to grow instead of forcing them to achieve. In some ways I've become the anti-"Tiger Mom."

Why was it hard to accept Penny's Down syndrome?

In the beginning, I had a hard time accepting that Penny had Down syndrome because I thought it was unfair. It was as if having a baby had become an equation, and as long as I did everything "right"-which is to say, took my prenatal vitamins and didn't drink alcohol and followed all the other guidelines-then I would get the baby I expected, the baby I thought I deserved. But after Penny was born, I realized that babies aren't products of consumption that I can purchase or discard. Rather, every baby is a gift, including every baby with Down syndrome. And yet even with that realization, I struggled to accept Penny's disability. As someone who had always loved school, I thought that I wouldn't be able to relate to my daughter and that Down syndrome would deprive her of the joy of learning. I was wrong on two counts. One, I've learned through Penny that there are plenty of ways to enjoy this life-reading and writing and school are just one among many. Two, Penny surprised me by being a lot like me. She spends hours most days reading stories, so as it turns out, she's a lot like me after all.