September 06, 2011 by Tim Muldoon
"Like" the Patheos Catholic Page on Facebook to receive today's best commentary on Catholic issues. 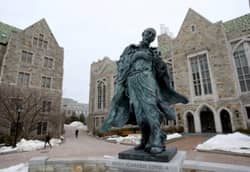 For most of my academic career I have taught undergraduate students, especially freshmen. For the past several years I've had the particular privilege of leading a year-long seminar on the Western Cultural Tradition, in which we read the classic texts of both Athens and Jerusalem. Starting on this first day of classes today, our constant question is about the roots of our contemporary culture; my task is to help young students understand the intellectual and religious history of the world they inhabit.

On what is a good society to be built? What is the wisdom worth learning that might contribute to a world in which life is worth living? What, in other words, might make the conditions of human life better than what Thomas Hobbes described as "nasty, brutish, and short"? What, in other words, do I, a Catholic theologian amidst students of varying backgrounds, hope to share with my students who, perhaps for the first time, are asking themselves what kind of lives they seek to live?

My job, above all, is to echo the wisdom of Saint Benedict and "welcome the guest as Christ." Before I teach ancient Greek or Semitic literature, or the Bible, or theology, or Christian spirituality, I teach students. I meet them, come to know and love them, and engage with them in conversation. The root of the word "conversation" is the same as "conversion": Latin, meaning "turning together." That is a good image of what happens, a turning together toward the truth of the world. It is why the Church began the Western university system in the Middle Ages. In conversing with my students I hope to be changed, and I hope that they too will change, that we will help each other see the world more clearly.

The Carmelite William McNamara once described contemplative prayer as a "long, loving look at the real." Academic study can involve the same attentiveness to reality, and that's what I hope for my students. I hope to detach them from the usual things that stimulate their desires, in order that they might stop and pay attention to the big questions. I want them to sit with these questions for a long time, in order that there might emerge the great desires that often lie buried underneath the noise of the world. Those concerned about who wore what at the Video Music Awards, or who's playing whom in the new college football season, or where to find the best parties on campus are likely to be distracted from thinking deeply about the most important question of their lives: what is worth loving?

That is the question, I think, that lies at the foundation of any good society. In studying the Western cultural tradition, it is clear to me that good societies, those comprised of people with a shared sense of purpose that spills over into care for their fellow citizens, are those built around a shared myth. In ancient Greece, there was a myth of the hero; in classical Greece, of virtue; in ancient Israel, of divine protection; in Christian Europe, of Christ the King. By "myth" here I do not mean a false story, nor do I suggest that all myths are equal. Instead I mean a story that gives shape to a culture, gives its efforts meaning, gives its people a sense of what they strive for as a community.

The current American myth is about freedom, and it is becoming tired, because it is a kind of anti-myth that suggests that everyone should go his or her own way. The panoramic view of millennia reminds us that the American myth, and the Enlightenment virtues upon which it is constructed, are still young and limited. I hope my students will see that a good society cannot thrive upon an anti-myth, and that they will return to the fundamental question of what is worth loving. The shared pursuit of that question, drawing from the wisdom of the past, opens us up to consider the very nature of love itself and the reasons why we naturally feel that people and life itself are worth loving.

The better myth upon which to build the good society is a myth about love, and for that reason I find the Christian story so compelling.

I want to challenge my students to see through the veneer of the freedom myth, with its consequent disasters in attitudes toward money, power, and sex. The Christian story proposes that God became human in order to free us to love, and not be shackled by tiny desires. Instead of grasping for cash, reputation, and random pleasures, it proposes that we can orchestrate our lives as gifts to others. In the process, we can discover that instead of losing ourselves, we find both God and our truest selves.

(Footnote: When the creators of the new Martin Luther King memorial get his words right, we'll have a monument that celebrates this new American myth.)