September 12, 2011 by Pat McNamara
"Like" the Patheos Catholic Page on Facebook to receive today's best commentary on Catholic issues. 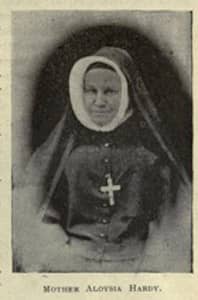 In 1792, when the French revolutionary government repressed all religious orders in the country, it effectively destroyed an educational system that was overwhelmingly Catholic. In the wake of the revolution, many religious communities were founded to revitalize Catholic life in France. One of them was the Society of the Sacred Heart, founded in 1800 by twenty-one-year-old Madeline Sophie Barat, to teach young women. Barat, who led the community for sixty-five years, was canonized in 1925.

In 1818, Sister Rose Philippine Duchesne (canonized in 1988) established their first American foundation in Louisiana. In 1821, she founded the Academy of the Sacred Heart in Grand Couteau (the longest-running Sacred Heart school). One of the school's first five students was twelve-year-old Mary Ann Hardey, whose family had just emigrated from Maryland. Four years later, Mary Ann became one of the community's first American members and went on to found Sacred Heart foundations in the United States, Canada and Cuba as Mother Aloysia Hardey.

The Hardys were among the nation's first Catholic settlers during the 1600's. Mother Aloysia's biographer notes that the family was "so intensely Catholic" that they added an "e" to their name "because some of their kin in Maryland who were known by the latter name had apostatized from the faith." The family left Maryland to take over her late uncle's plantation in Grand Couteau (which also meant that they became slave-owners).

Her first superior said of Sister Aloysia: "She is likely to become a great success." At twenty-three, she was first appointed superior of another convent, which a biographer describes as "a mark of unusual confidence." One former student wrote of her: "I can see her yet, as she looked then, so kind and unaffected in manner, that the youngest child in the house could approach her with ease, and yet, withal, so dignified, that the eldest respected and reverenced her."

In 1841, Mother Aloysia traveled to New York to start the Society's first East Coast foundation. She remained there for over thirty years. The first convent was on the corner of Houston and Mulberry Streets, but she wanted an area with more property for a boarding school. For a while, she tried rural Astoria, but she wasn't completely satisfied with it.

In 1847, New York's Bishop John Hughes told her of property for sale in a section of Harlem known as Manhattanville. The owner refused to sell "to the Church," so Mother Aloysia ordered her students to make a novena (a series of prayers said over the course of nine days). By the ninth day, the owner had died, and the sisters were able to purchase the land. Bishop Hughes commented: "Beware of opposing Mother Hardey because she will kill you with her novenas."

She was gifted by nature and grace for immense undertakings; she was of simple manners, her words were few and kind, and she had great power of organization. When asked on her death-bed the number of her foundations, she replied: "I have never counted them, I went where obedience sent me"; that sentence delineates her character and her career.

Over the years, she developed into a capable businesswoman with a keen appreciation for the law. One attorney commented: "She has missed her vocation. If Madame Hardey were a partner in my firm I should be a rich man, for she is the cleverest woman I have ever met."

In 1872, Mother Aloysia moved to Paris to assist the community's superior general. Over the next fourteen years, she oversaw American affairs, and helped establish new foundations in Europe. Known among her French colleagues as the "Grand American," old age and illness eventually took their toll. Mother Aloysia Hardey died at age seventy-seven on June 17, 1886. The community's Superior General wrote: "The ablest physicians were unanimous in saying that the principal vital organs in Mother Hardy were worn out, and we might add, they were worn out in the service of the Divine Master."