A Journey in Progress: An Interview with Alisa Harris 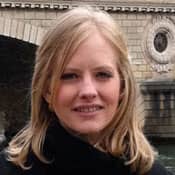 As a teenager, Alisa Harris was the poster child for conservative Republican Christianity. She protested abortion clinics, campaigned passionately for GOP congressional candidates, listened to Rush Limbaugh, and was prepared in any conversation to win the country for a "Christian America."

But something happened as Harris entered adulthood. Her work as a journalist brought her face to face with others with very different realities than the ones she grew up with, causing her ironclad worldview to begin to change. Raised Right: How I Untangled My Faith From My Politics is her story of leaving the culture wars behind in search of a more meaningful way of living out her faith.

Patheos' Deborah Arca recently spoke with Harris about her new book and the faith journey that inspired it. (For more conversation on Raised Right, visit the Patheos Book Club.)

Raised Right is a searingly honest, transparent and very personal book chronicling your evolving faith journey. Why, at the young age of 26, did you decide to write a spiritual memoir?

I wanted to write it now because I feel that a lot of people my age are going through this journey right now. I wanted to tell the story of this generation—the story that I'm going through, my friends are going through—and it seemed that it was a story that needed to be told now. We're already seeing the consequences of these shifts—for instance, in polls that say millennial evangelicals no longer believe in banning gay marriage—and in public debate about the future of the religious right.

I also wanted to make sure that people knew it's a journey in progress and I wanted to have the humility to understand that I may change my mind about things later. So I tried to approach it knowing that I am very young, and I don't want to pretend that I've figured out the answers to all these questions that people much more brilliant than I have been debating for centuries.

You were carried to abortion clinic protests before you could even walk. How did these early experiences with your family form your faith as a child and teenager?

I think one of the ways it formed me was that the world was very black and white. There were good people and then there were enemies. These enemies were flesh and blood, they were here on the earth—and they were the people trying to take religion out of the public square and the people trying to push abortion into the public square. So I viewed life as a battleground—all the time. Every interaction I had with people from the outside world was considered an opportunity to wage a battle.

But one of the positive things it taught me was that we have to be active in the world. We have to act on our beliefs in justice and with a sense of compassion. That was what motivated my parents and the reason they did what they did. I've tried to retain that idea that we have a responsibility to make a difference in the world. Even though we might not be able to recreate the world in the way we want to, we have a responsibility to try.

You dedicate this book to your parents, and yet your story is a strong critique of the conservative religion they espoused and raised you with. Were you worried about what your parents would think about the book?

Yes, I was worried! I showed them just one chapter in the entire writing process and then sent it to them when it was pretty much finished. I was a little nervous about what they thought but I was really delighted when my Mom said she really loved it. Part of my purpose for writing the book was to explain myself to her, and to explain my generation to her generation. So the fact that she really liked it meant a great deal to me.

I find it interesting that you grew up in an extended family that had very contradictory religious points of view—your grandmother was an atheist, as I recall.

How did those women of different faith traditions shape you as a woman of faith?

I talk in my book about how the tradition I grew up in was against women speaking out and having opinions, but the great thing is that my parents raised me to have opinions. They raised me to consider myself an intellectual equal with any man and any other person I encountered and that I had a duty when I thought something was true or right to say it. They really did raise me to be a strong woman despite some issues with the tradition we were in at that time.