September 11, 2011 by Max Lindenman
"Like" the Patheos Catholic Page on Facebook to receive today's best commentary on Catholic issues. 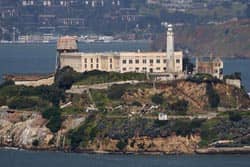 My 9/11 story takes place about three weeks before 9/11. I was visiting San Francisco. The day was unusually fine—blue skies, a light breeze. "Bright" would have been the operative word, and the brightness had found its way into my mood. That's why seeing Alcatraz caught me by surprise, much as windows sometimes catch heedless birds. The island is bleak and craggy—not building a prison there would have been a terrible oversight—in a word, dark. At that moment, its darkness seemed less an absence of light or color than a positive force in itself. The gloom pierced through the lightness I'd been feeling and stayed with me, a lurking, mocking anxiety, as I went sightseeing in Japantown and Pacific Heights.

On September 11, when the Towers came down, killing thousands and covering Lower Manhattan in ash, I thought, "So that's what Alcatraz was telling me."

Darkness defying light, rude nature resisting civilized grace—either one is a pretty fair summary of what happened on 9/11. At a distance of ten years the society we had then seems almost giddy in its optimism. With the Cold War won hands-down, Americans could stop worrying and get down to the serious business of making their lives as rich and easy as possible. Everyone could have a cell phone. Everyone could have a laptop. Thanks to the internet, everyone could fill his mind with news or great works of art or pornography, according to his tastes. The biggest news story was the disappearance of intern Chandra Levy—a diversionary bit of scandal for all but the principal players.

Since then, a great deal of that brightness has dimmed. The economy is in recession; some fear it will head into depression. For nearly everyone, unemployment, foreclosure, and poverty have become very real possibilities. Education and real estate, the two investments every American once assumed safe, are starting to look risky. Political discourse has taken on the tone of the apocalypse.

It's not that 9/11 caused these things, of course—although the nation's military response has been both expensive and politically divisive—but in a way, it heralded them. At the outbreak of World War I, British Foreign Secretary Sir Edward Grey is reported to have said, "The lamps are going out all over Europe. I doubt we shall see them lit again in our time." With the Great Depression and World War II in his future, he had a point. And I'm afraid that anyone on September 11 could have made the same point with the same validity.

Living with a sense of impermanence and precariousness may not be the worst way to develop a properly Christian mindset. Lent begins with a reminder that we will all return to dust. The world of Christian art is awash in reminders of mortality—danses macabres that show Death preying on all ranks of society, hourglasses carved into tombstones, wall murals of bleached Capuchin bones. Once you've got death's inevitability through your thick skull—pun intended—the notion of a life circumscribed by poverty or illness seems less shocking than it otherwise might. Dial "memento mori" back half a notch, and you're left with "shit happens."

In fact, since 9/11, I've found myself regarding the world with a growing sense of detachment. I'm no longer surprised when friendships end, jobs sour, plans fail, or loves fade; it seems like the natural way of things. When my father died—eleven months after the attacks—my mother found me calm to a degree that struck her as disrespectful to his memory. What she never understood was that I'd spent the last year waiting for the collapse of Western Civilization. The death of a single man, even one so intimately connected with me, seemed like small beer in comparison.

But by itself, contemptus mundi, or contempt for the world, doesn't make a Christian; it makes a crank. Not long ago, I learned that a woman I knew was moving out of state. It occurred to me that, though we'd never been good friends, we probably could have been if I'd put forth an effort. I had withheld it, more or less, because, as a post-doctoral student at the university, she was bound to leave town someday. Making friends seemed like a waste of time. And that's just one practical implication; there are philosophical ones as well. Seeing the things of this world as unimportant is only a small step above seeing them as bad, and wondering whether God, Who created them, is entirely on the up and up Himself. And of course, it's only a quick jump from there to "Jesus and the Magdalene, settin' in a tree."