September 28, 2011 by Julie Davis
"Like" the Patheos Catholic Page on Facebook to receive today's best commentary on Catholic issues. 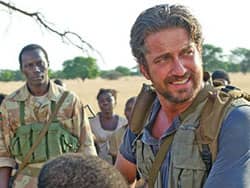 When I hear people pushing inspirational Christian movies, I instinctively duck. This usually means sweet, earnest stories where nice little speeches tell us everything that everyone feels, and how God "spoke" to them. Inevitably, I have to surrender skilled storytelling just to get a Christian message.

So, my ears perked up when I was warned about Machine Gun Preacher and its "R" rating (for disturbing images, violence, language, drug use, and a scene of sexuality) and how it packed considerable Hollywood firepower in the form of stars Gerard Butler (300), Michelle Monaghan (Kiss, Kiss, Bang, Bang), and Michael Shannon (Revolutionary Road), and was directed by Marc Forster (Monster's Ball, Finding Neverland, Quantum of Solace, Stranger Than Fiction, The Kite Runner).

Machine Gun Preacher ain't your mama's Christian movie. In fact, it ain't a lot of Christians' idea of an inspirational movie. But it should be. It isn't afraid to show us the afflicted children of the Sudan, in contrast to our comfortable lives, and leave us shaken.

Sam Childers (Gerard Butler) is an extremely violent heroin addict and drug dealer, and completely self-serving, as we discover early in the film when he castigates his wife for leaving her stripping job because she has become Christian. Eventually Childers, too, becomes Christian and begins supporting himself as a carpenter. He takes a guest preacher's words to heart and goes to the Sudan to help missionaries with construction work.

It is there that he comes face to face with the brutal violence the Lord's Resistance Army (LRA) rains upon the people: burning villages, selling children into the sex trade, and forcing boys to become soldiers. Childers builds an orphanage and, when he finds it repeatedly under LRA attack, eventually goes on the offensive.

The story doesn't just tease a single strand, however. Childers' dependence upon his family is a key element of the story, as is (in his passion to help the African orphans) his occasional neglect. His wife's unwavering support makes him pick himself up and keep trying, even when, later in the film, she must remind him that he is "all we've got here."

Christianity is key to this story and it depicts an interesting combination of small church, evangelical worship, and the mysterious, transforming force that shakes believers to their core. It is the encounter with Christ that leaves the believer often unable to explain what has happened, but infused with the passion to give one's all.

Yet the movie doesn't preach. It shows us Childers' life and experience, but encounters with God are his own, and the audience may ponder them later.

Some viewers may be troubled when Childers roars, "God don't want sheep! He wants wolves with teeth." It's a message that works at the time it is uttered, but when Childers hits a downward spiral we are left to wonder whether that is really what God wants. The answer, I believe, is given in a scene of determined hope; we see Childers standing like a shepherd, amid a flock of rescued children. No image in this film is accidental and this one, above all, is one that must be taken to heart.

The film's power lies in the straightforward story that doesn't need sophisticated plot devices to hold interest. It combines the immediacy of a documentary with the considerable skill of the director and actors, to tell a powerful tale that makes viewers uncomfortable—precisely because they know it has truth behind it. When Childers is building a cross in his African church, and his face is framed in the center of the cross, we understand in whose name he comes.

Machine Gun Preacher pays viewers the compliment of knowing that they don't need continual speeches about motivations and reactions. They don't need Childers to make a speech when, after killing a teenage soldier, he spirals into a loss of faith in God and everyone around him. The full range of humanity, inhumanity, helplessness, and suffering are brilliantly conveyed in a single sequence that is more eloquent in its silence than any speech.

There is violence. It is the cruel violence carried out by inhumane predators in the Sudan. The audience needs to see it, and the helpless victims, in order to grasp what is at stake. Likewise, the violence of Childers' early life is vivid and repellent, but none of it is gratuitous or glamorous. This is violence as it probably should be portrayed—repellent and costly, not Hollywood-glossy. It is real.