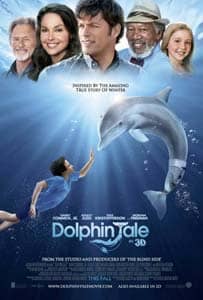 Charles Martin Smith's Dolphin Taledoesn't waste any time getting us into the water and swimming amid its eponymous sea creatures. As the opening credits roll, we're already in the sea and swirling through a pod of dolphins. That's the stuff your kids (and you) want to see—the amusing, at times astounding array of sea bodies in motion. Families who spend 3D dollars will get their money's worth in these opening moments, and while most of the film takes place on solid ground where two dimensions do just fine, the underwater introduction carries a promise of magical moments to come.

Smith delivers on that promise with the help of a surprisingly solid crew of actors—Morgan Freeman, Harry Connick, Jr., Ashley Judd, Kris Kristofferson, and two skilled children, Nathan Gamble and Cozi Zuehlsdorff—and a cinematic style that imbues this otherwise straightforward family film with elements of fantasy.

Smith's dolphin pod opening ends with a match cut—just as a dolphin splashes from the water, we see a swimmer splash into a pool and race to the other end. That cut is a nice symbol of the way the entire film works aesthetically (see our related essay on Dolphin Tale's fanciful style), as Smith merges magic and reality, dolphin and human. He insists that the feet of his story are firmly planted in both worlds and invites us to straddle both worlds, too.

When the story proper begins, we meet some crab fishermen doing their work near this same dolphin pod. It's an ominous sight. Within moments, we see a dolphin ensnared amid a rope attached to a crab trap, which has in turn wrapped itself around the dolphin's tail. The mammal is beached and bleeding until a young boy comes along to save the day. Over the next two hours, of course, we will understand that the boy is the one who needs saving, along with most every other human character: one needs a new family, another a renewed career, while some, like the ensnared dolphin with his injured tail, need a whole new limb and lease on life. Everyone gets what they need in this warm-hearted film, but the resolutions are no less satisfying for being wholly expected.

Dolphin Tale is based on the true story of a three-month old dolphin that was snared in a crab trap in Florida's Mosquito Lagoon in December 2005, then rescued with the help of a fisherman and some Sea World personnel. Winter, as the dolphin came to be known, was taken to Clearwater Marine Aquarium, where she was nursed to health even as her injured tail sloughed off (in the film, it must be surgically removed to save the dolphin's life—that's what they call a "movie moment" in the business). Over the next year and a half, a prosthetics expert set to work on making a new tail for Winter, and the silicone sleeve designed to host the artificial limb has gone on to enhance and improve human prosthetics. Thus has Winter become a source of inspiration to amputees and other people with disabilities.

Those facts form the basis for Dolphin Tale, though most of the movie's actual tale is make-believe. Dolphin Tale's hero, Winter notwithstanding, is an Everyboy named Sawyer (Gamble). He's a loner. He's lost his dad to sudden departure, and he's losing his beloved older cousin, Kyle (Austin Stowell), a high school swimming champion, to sudden deployment. Kyle has joined the Army, and before long, he supplies the film with images of the kind of post-war suffering with which Americans have lately become all too familiar. The main job of the story is to reunite Sawyer and Kyle and show Kyle (and other amputees like him) a path to healing. Other characters—especially Freeman's Dr. McCarthy, who designs the tale, and Connick's Dr. Haskett, who runs the marine hospital—get to bask in the glow of all this goodness.

But Dolphin Tale rarely feels too sweet. Smith, along with screenwriters Karen Janszen and Noam Dromi, supply the film with the lynchpins of the best family entertainments: danger and loss, possibility and promise, and yearning for a better world—one that will surely be provided by the film's end. Again, that provision is never really in doubt, but I like how the movie situates itself in the world as we know it, with its familiar dangers and tragedies. Dolphin Tale shows us the real loss soldiers have endured, but also the real possibilities that present themselves when we take care of the least of these among us, whether mammal or human.

Dolphin Tale takes the true story of an injured dolphin, and with a nod to the real Winter's usefulness in expanding human prosthetics, expands it into a story about injuries of all kinds—emotional, relational, physical—and reminds us to hold close our belief that all such injuries can be healed. Smith's film is finally about how humans strive to recreate and renew the world, and how we can make it better by living into whatever we can imagine.