There was no one for miles, and the wind would blow it away, but still I shufﬂed through the sand, spelling r-e-d-m...with my footsteps. I'm not sure who the message was for, since no one would see it but God.

For nearly all my childhood and adolescence, on into early adulthood, politics gave my faith meaning. Politics expressed my faith. Politics was my way of ﬁghting for "a future and a hope," my way of proving I believed what Jesus said: "Take heart! I have overcome the world." A surge of political fervor marked my soul's revival, and the vision of a godly America was my promised land. My faith was so intertwined with conservative politics that I viewed them as one and the same. In my ironclad worldview, faith and politics were inseparable.

So when I ventured out into the complicated world and found it shaking my conﬁdence in the goodness of culture-war politics, my faith shook too. With the conservative political accoutrements of my evangelical Christianity stripped away, little of my faith remained.

This book was borne out of my search for a faith that's more than the sum of my political convictions and for a meaningful way of living it out.

When it comes to politics, the children of old-school evangelicals are undergoing a shift. We have yet to convince our parents that we are not rejecting what they taught us but living it out in a different way. My parents taught me to be suspicious of power, so when I see power concentrated in big corporations, big government, and big money, I become suspicious. My parents taught me to ﬁght for the disenfranchised and weak—the child who couldn't pray in school or the businessman who couldn't work without government bullying. Today I feel compelled to combat injustice when I look at families torn apart by harsh immigration laws and when I see men wearing three-thousand-dollar suits while orchestrating the crash of the American economy. I hear a dad talk fondly of the American Dream as he enters a lottery to get his son into a decent school, and it outrages me that his son's fate rests on a gamble. My parents' hearts broke over the ugliness they saw in abortion clinics, and I am heartsick over the ugliness of wars in Iraq and elsewhere. But the lesson they taught me remains: when you see injustice, you have to speak up.

When I mention I'm writing a memoir about leaving the culture wars behind, people's ﬁrst question is, "Aren't you young to be writing a memoir?" This is a delicate way of saying, What can you possibly have to say? And what if you change your mind once you actually know what you're talking about? Sometimes I think they're right. But most of the time, I think that I have no choice but to write this—for myself, for my peers, and for anyone interested in understanding us.

Yes, this book is for me. Writing is not just how I communicate my thoughts but how I actually think. It's the way an experience or a ﬂeeting thought becomes real to me instead of ﬂoating away. It's the way I catch my thoughts and turn them over and over, testing their weight and deciding whether to keep them or throw them away. For me, to write is to become, and I can't become that older, wiser person without skewering these youthful thoughts to paper, without holding them up for my scrutiny and yours. The ﬁrst drafts of this book illuminated my own failure to love. Working to correct those ﬁrst bad drafts has made me strive for more charity in my everyday life. It has shown me that I don't always live out the things I know to be true because complaining about falsehood is so much more convenient than living out a radical alternative.

I am also writing this book for other ex-culture warriors who, like me, grew up with signs in their ﬁsts and are trying to ﬁgure out what to do with their now-empty hands. Like me, they were raised to be activists, and like me, they probably have felt lost as their belief in the nobility of the culture wars fades away. They are looking for some worthy cause where they can channel the passion for justice and truth, bestowed by their parents, into something that actually builds people's lives instead of tearing apart relationships and destroying faith.

Some of these young Christians know what they believe. Some don't. Some have fully embraced left-wing politics; some have just decided they are no longer Republicans. Some are trying to change their chosen political party from the inside, while others remain skeptical of the entire spectrum. But all of them recognize that something is deeply wrong with the evangelical politics in which our childhoods were immersed. Today, half of young churchgoers say Christians are "too involved in politics." Almost half of young born-again Christians think the "political efforts of conservative Christians" are a problem facing America. Less than half of young evangelicals identify as conservatives, compared to nearly two-thirds of their parents. Fewer and fewer identify with the Republican Party. Where do we ﬁt?

A Polish Town That Declared Itself "Free of L.G.B.T." Now Wants To Take It...
Hemant Mehta
2 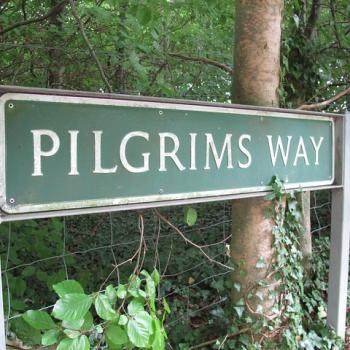 Practices From the Inside Out: My Neighborhood Pilgrimage
Greg Richardson
3

Walter Moberly's The God of the Old Testament-- Part Six
Ben Witherington
Get Patheos Newsletters
Get the latest from Patheos by signing up for our newsletters. Try our 3 most popular, or select from our huge collection of unique and thought-provoking newsletters.
From time to time you will also receive Special Offers from our partners that help us make this content free for you. You can opt out of these offers at any time.
see our full list of newsletters
Editor's picks See all columnists