September 08, 2011 by Greg Kandra
"Like" the Patheos Catholic Page on Facebook to receive today's best commentary on Catholic issues. 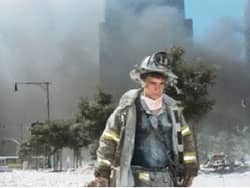 My first thought, in bleary half-sleep: "Where am I?"

And then I knew.

I looked around at the pale walls of a high rise hotel on Manhattan's west side, and remembered that almost 24 hours earlier, on a blindingly beautiful late summer morning, in the start of an otherwise ordinary day, my country and my city had been attacked. I was in a hotel room because it was impossible for me to get home and there was no place else for me to stay.

I climbed out of bed and looked out the window. It was a gorgeous day, just like the one before. On the sidewalk, a dozen or more stories below, there were people heading to work. I saw a few cars moving down below. And then the sirens got louder. An ambulance? A fire truck? The sound grew and then faded. I picked up my watch from the table by the bed. It was just after 7 a.m.

Most Americans will tell you they remember vividly where they were on 9/11, when they got the news. I was just arriving at my office at CBS News on West 57th Street in Manhattan, where I worked as a writer and producer for "60 Minutes II." When I got off the elevator on the ninth floor, at about 9:30, I noticed a crowd of people huddled in front of a large window, looking south. Something was wrong. I turned right and wandered into my office area. Every TV set, in every office, was on. Within seconds, I knew. We were a few miles north of the World Trade Center. And to the south, we could see the billowing smoke.

We spent the morning staring in disbelief at what was unfolding on TV. Producers gathered in neighboring offices and found a spare seat on a couch crowded with old newspapers and boxes of videotapes, and just sat and watched the TV screen, stunned. Late in the morning, I got the call to report to the newsroom, so I grabbed my shoulder bag and headed across the street. Before I left, I called my wife in Queens, about ten miles away, to tell her what was happening. She said she was on her way to church. A lot of people, it turned out, were doing the same thing. (She told me later that she had grabbed a plastic bag of cheap rosaries that she'd kept stuffed in a drawer, and gave them out at our parish church to anyone who wanted them.)

I told her I loved her and would be in touch.

I wouldn't see her again, or even make it home, for another 36 hours.

I spent most of 9/11 in a television studio, under hot lights, crouched over a computer screen, writing hourly updates for CBS News. Information was scattered, confusing, chaotic. Anchor Dan Rather was on the air 'round-the-clock. The newsroom staff subsisted on warmed-over food from the cafeteria, and bitterly bad coffee. Again and again, we saw the same pictures flicker across the TV screens, the images that would be burned into the world's collective memory: the plumes, the smoke, the collapse. We lost track of time. Afternoon became evening. I remember Dan's opening words on the CBS Evening News that night. It was the only thing that could be said with any certainty: "Good evening. September 11, 2001 is a day you will remember for the rest of your life."

The hours ticked by. Finally, around 1 a.m. on September 12, CBS News signed off. We could go home.

Except that we couldn't.

The roads were closed. The subways and trains had shut down. We were stranded in the city. CBS was able to secure hotel rooms scattered around Manhattan, so a group of us headed out of the broadcast center and into the night, walking the several long blocks toward the Avenue of the Americas and our hotel.

The first thing we noticed: there was no traffic. On every corner was a cop or a soldier. We made it to Broadway, and I looked down toward Times Square and saw something I'd never seen before, or since: the entire area had gone dark. No neon, no lights. No people. It was deserted. We trekked the last few blocks and made it to the hotel and checked in.

That was what I remembered, or most of it, from the day before. Now, looking out my hotel window, I had to find my bearings and figure out what to do. I needed to get back to the office. I threw on my clothes from the day before and made my way down to the lobby.

As I was checking out, I noticed someone checking in: a fireman. He still wore his heavy coat and helmet and boots.