We Can Do Better: A Review of "Seven Days in Utopia"

September 16, 2011 by Rebecca Cusey
"Like" the Patheos Evangelical Page on Facebook to receive today's best commentary on Evangelical issues. 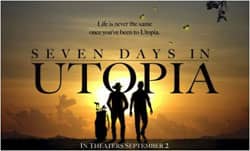 Robert Duvall can do no wrong in my eyes. So when I sat down to watch "Seven Days in Utopia" with high hopes. Unfortunately, while Duvall nearly pulls off his character, he is hampered by a movie with more sermon than story and too many unbelievable elements for his presence to overcome.

Professional golfer Luke Chisholm (Lucas Black) drives like a maniac through Texas, trying to outrun the memory of his flamboyant meltdown at his recent golf tournament. To no avail, apparently, because in swerving to miss a cow, he crashes through the fence of Johnny Crawford (Duvall). The cowboy just happens to be a former professional golfer himself—what are the odds?—and he's got the goods to heal both Luke's heart and his game.

Luke has landed in Utopia, a Texas town with friendly faces, helping hands, and no problems bigger than a posse of strutting young men who are slightly less friendly than the rest of the natives.

Johnny promises to teach Luke golf lessons and, meanwhile, he can stick around for the old-time fairs and rodeos that the town enjoys apparently on a daily basis. Luke promptly meets the town's lone eligible young lady, Sarah (Deborah Ann Whol). The redheaded beauty is a budding cowgirl herself and instantly taken with this interloper from the 21st Century.

I'm kidding, of course. Utopia didn't exist in the 1800s any more than it exists in now. Although it's supposed to be realistic, the town is set in a Western dream, all pinewood fences and friendly horseshoe games without a Wal-Mart in sight. Texas with no Wa-lMart? That's like New York with no sushi.

It's a pervasive problem in the movie: the writer and director creating characters, situations, and settings that have no similarity to real life. In one scene, Johnny teaches Luke to see, really see, by having him paint a portrait of the shot he wants to make. Literally. With paint and canvas. It's a fine idea, but I was distracted by the glorious and technically excellent paintings created by both Johnny and Luke. They were supposedly done in an afternoon, but it would take a real painter a day or two to achieve such a result. Someone like me, or presumably Luke, couldn't make it happen in a month of Sundays.

In another lesson, Johnny takes Luke flying in a Cessna and gives him about 45 seconds of instruction on how to fly an airplane. Then he kills the motor and pretends it's an emergency. It was supposed to teach something about keeping your cool, but I kept wondering a) how they would scrape Luke's remains out of the crater in the ground and b) when the FAA would show up to revoke Johnny's pilot's license.

A real troubled soul would punch Johnny in the face the moment his feet were on terra firma, but Luke didn't seem to mind.

The movie pulls its punches both figuratively and literally. Johnny, we're told, is a former alcoholic, but is now a wise guru and perfect in every way. Luke, for all his lost-boy ways, never has anything of which to repent other than an overreaction to a bad putt. In order for something good and redemptive to happen, there needs to be an openness to ugly, to bad, to sin in a movie universe. Everything in "Seven Days in Utopia" is nice—plain, milquetoast nice.

People of faith will appreciate the message that God loves Luke and has a plan for him. Duvall delivers this message faithfully. In the hands of a lesser actor, his lines would be corny and unbearable, but Duvall pulls it off.

It's good news indeed, but sadly, the rest of the movie doesn't live up to the good news. It's laughably clumsy. It will suffer in contrast to "Warrior," in which Nick Nolte plays a reformed alcoholic who relies on Christian faith to help him as he attempts to reconcile with his sons. His character is beautiful in his vulnerability, longing, and pathos. "Machine Gun Preacher," coming later this fall, explores the impact of conversion on a hard-core criminal who takes some of his questionable ways and uses them to serve what he thinks is God's will. Both these movies are friendly to Christianity and reflect it in the world in which we live, not some pleasant version that doesn't exist.

"Seven Days in Utopia" is not the best you can do.