What You Gain When You Lose

Something in me exploded in that moment. I think you call it joy. God had just opened a new and exciting door at one of the lowest seasons in my life.

Personal Losses, Kingdom Gains
Let's face it. Everyone "loses" at one time or another. Some just don't want to admit it. But, beyond the pain and disappointment, losing can uniquely do something for you. It can create an empty place in your life for God to fill with something new. God required Joseph to "lose" (or surrender) so much: his family, his time, his reputation, his freedom, his finances, and his work. But Joseph was destined to experience gains, Kingdom gains, he never could have imagined. The losses took him as low as a pit; the gains, as high as a palace. But through the losses, he not only found God—he found his destiny in God. Jesus said (Matt 16:24), "Whoever loses his life for me will find it."

Eventually, after a few long months, the issue with my voice was diagnosed as a rare condition called spasmodic dysphonia. The only treatment known at that time was an injection directly into the vocal chords, and this improvement would only be temporary. On one hand, exciting doors were beginning to open, but the challenge of my voice was not yet over.

Joseph faced some deeply discouraging moments, months and years. One can only imagine his desperate thoughts during the hours and months he spent in that pit, as a slave, and in prison. But ultimately, Joseph's "losses" accomplished incredible things. Eventually, God drew Joseph out of the pit, enslavement, and prison and elevated him to a remarkable role of influence. He became second in command to Pharaoh. Joseph's journey inspires me to believe that through my struggles and yours:

God's purpose is served in Unimaginable Ways. As God would later use Moses to deliver the people of Israel out of Egypt, he first used Joseph to bring them in. It became a place of safe keeping during a great famine. In similar ways, God is at work in our struggles accomplishing more than we can now see. Also, we find in our losses...

God's grace is experienced in Extraordinary Moments. Perhaps the most poignant one was when Joseph faced his brothers after their betrayal. Working through the grief and through many tears (Gen 50:20), he chose to forgive his betrayers, saying: "What you meant for evil, God meant for good." When you and I have been hurt by others, hard-to-heal wounds find release in God-ordained moments of truth and forgiveness. Finally, we also discover that in loss...

God's glory is seen in Unexpected Places. Up close, Joseph's life appeared to be riddled with difficulties and hardships. From a wide-angle view, its clear God was using those very challenges to move Joseph away from the comforts of his father's estate and into an unbelievable opportunity of broader influence. Just as something in our lives seems reduced, God is often enlarging something else for his glory.

When I heard the visiting guest speaker ask me, "So...you're a preacher and you can't talk. What are you going to do? Write?"—little did I know the words that seemed so abrupt would prove to be so profound. You see, while I was struggling with my personal voice, God was opening a new "voice" to people around the nation and the world. And, while I was having a hard time talking, I was asked to write two books entitled (at the publisher's request) Now We're Talking! How ironic. It's true after all: If we're patient and believe, our personal "losses" can be turned into Kingdom gains! These books are now under a different title,Conversation Starters, and have been in print for 15 years.

Paul said it best (Phil 3:8): "I consider everything a loss compared to the surpassing greatness of knowing Christ Jesus my Lord, for whose sake I have lost all things. I consider them rubbish, that I may gain Christ..." In other words, gaining Christ often involves losing other things in our lives.

God has been gracious to me. Doors to write have continued to open and the voice has gotten stronger. Although not completely recovered, it is much improved. To this day there remains a residue of brokenness in the tone. It's not enough to keep me from teaching and preaching—I do lots of that—but it's enough to keep me telling this story and to remind me of how much I gained the year something in my life was taken away.

(This column is adapted from an article written by Robert Crosby in The Pentecostal Evangel.) 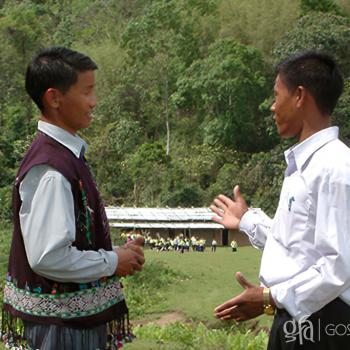 Gospel for Asia Pastor Knows Love Overcomes Lies
GFA Staff Writer
Get Patheos Newsletters
Get the latest from Patheos by signing up for our newsletters. Try our 3 most popular, or select from our huge collection of unique and thought-provoking newsletters.
From time to time you will also receive Special Offers from our partners that help us make this content free for you. You can opt out of these offers at any time.
see our full list of newsletters
Editor's picks See all columnists