Why Would I Leave Islam? 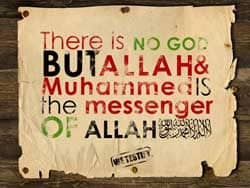 It's my anniversary, well, sort of. Eighteen years ago on Labor Day weekend, a Sunday, I said my shahadah (declaration of faith as a Muslim). I was standing in the front lobby of the Islamic Society of Greater Kansas City. I had just attended a class for the sisters, and everyone had left. The only ones still in the building were the imam, me, and some guy vacuuming. I was nervous. I had talked about saying my shahadah with the ladies in the class; I planned to do it next week when a certain significant friend could be there to witness, but they urged me to not delay, using the "what if you get hit by a bus?" argument. "It's not between you and your friend; it's between you and Allah." Well, can't argue with logic like that, so I mustered my courage and approached the imam, telling him I wanted to officially become Muslim.

He stood with me out front by the bookcase so we would not be alone in any room; the vacuuming guy served as our noisy chaperone. I always enjoyed listening to this imam when he gave talks. His name was Adnan Bayazid, and he was from Syria. His point of view was common sense Islam. He had a very easy personality, but of course I was incredibly intimidated because he was an imam. He wasn't a pushover, either. He quizzed me on some of the major points of Islam to assure himself that I was doing this with knowledge. I must have passed his test because after a few minutes of questions, he asked me to repeat the testimony of faith after him:

He was clearly pleased. He congratulated me and then told me, with emphatic hand gestures, that anything I had done wrong, any sins or regrets I had, were gone, forgotten. This more than anything proved my undoing, and I began to cry due to the enormity of what I had done. He quickly excused himself before he, too, could get emotional, and I walked back into the multi-purpose room and leaned on a table and cried my eyes out. I was happy but emotionally worn out by the time I left for home.

Fast forward eighteen years and here I am, older, maybe wiser, maybe not, married for twelve years with five kids, living in suburbia and trying to help others have a bit of an easier time traveling the path I and so many other reverts have trod.

I've been through the many phases of Islam: the "SuperConvertitis" phase, where I tried to out-Islam everyone else; the burnout phase, where I just wanted to not think about Islam at all; the barely doing the minimum phase where only guilt and fear of Hellfire kept me going; and the phase I'm in now. It's kind of a comfortable phase. I'm steadfast in my faith, I know where my weaknesses are and I don't beat myself up for them anymore, and I try to maximize my strong points.

I'm not a "haraam alaik-er," and I'm not so easygoing that I'll simply smile and nod if I see a Muslim eating a ham sandwich and drinking a beer outside the masjid on Friday. I think I've found my niche as a Muslim, and it is in writing and trying to be an uplifting presence—not a role model, I'm not good enough for that—for my brothers and sisters in Islam. I also make it a point to occasionally poke the hornet's nest of problems in the Ummah so that people realize that we have to be more proactive in living and teaching Islam. I'm not Super Muslimah, and I'm okay with that.

I just read on one of my Facebook groups that one of our sisters has left Islam, and it got me to thinking. Here I am, Muslim for eighteen years, well settled in my faith, knowledgeable to a degree, not prone to histrionics. What could motivate a person, once guided, to abandon the faith? What could make me consider leaving Islam, even for a moment?

Wow, what a topic, eh? Why would I leave Islam? Part of me would say it's too damn hard. Waking up at aq godawful [time] in the morning, having to pray five—five!—times a day. Making wudu. Walking around with my body parts dripping wet is not comfortable. Having to pray every day at set times. I don't even brush my teeth every day.

Not being able to eat bacon. I know I can eat beef bacon or turkey bacon, but that's at home. I have to be a damned private investigator and quiz every restaurant employee, read every label. Is there pork in this? Do you make the sauce with wine? This eternal food vigilance is tiring and I look at all the great places featured on Food Network and think, can't eat there, or there, or there, can't even enter that country, dang place is full of pork, sheesh. I have to feel guilty or leave if I visit my mom, and she has a bottle of beer or a glass of wine with dinner. I pack my kids' lunch every day in case there's some sneaky pork in the school menu. It is, frankly, a hassle. It would be easier just to ignore it.