Addicted to the Supernatural?

The story of the Garden of Eden and the tree of knowledge does much to explain the outlook of those who take the Bible literally regarding intellectualism and knowledge in general. As the tale goes, Adam and Eve committed a grave sin by disobeying God's instructions not to consume the fruit from the tree of knowledge, which would remove the pair from their "perfect" state and plague them with all sorts of pesky facts and information. Throughout the Bible, God rewards his followers who put their faith in him over knowledge, family, and moral behavior. The religious, once banished from God's grace for becoming brainy, have spent the following years atoning for their "sin" by rejecting secular knowledge such as evolution. While their right to reject it is unquestionable, the harmful effect this denial has on society is worth considering.

Humankind frees itself from the shackles of ignorance through the acquisition of knowledge, but secular humanist and devoutly religious communities don't agree about where that knowledge is found. To humanists, observation, experience, and analysis of the physical world are the keys to understanding reality, while religious communities see this scientific knowledge as less important than their chosen scripture and revelations. This key difference in the approach toward knowledge informs both groups' feelings about intellectualism and the world itself.

Humanists, who are grounded solely in the natural world and emphasize the importance of human existence, work to discover more about the world in which we live. Intellectualism is seen by the secular world as a vital part of knowledge gathering, because the rational and critical thought that is encouraged by intellectualism fosters an environment that is beneficial to the pursuit of knowledge. Knowledge itself is pursued in order to improve quality of life through advancements in technology, medicine, and social sciences. The benefits of secular knowledge are so important that the only openly nontheistic Representative in Congress, Representative Pete Stark, introduced a resolution to establish an official Darwin Day to celebrate the field of science and one of its most valued contributors.

The commitment to ancient and divinely revealed truth leads many religious people to oppose intellectualism, mainly because scientific thinking reveals a continuously changing catalog of knowledge in which previous information is either improved upon or discarded altogether. For those who emphasize the importance of God-given truth, such abandonment or modification of ideas is unacceptable, as it would suggest that their heavenly truths weren't so divine after all.

The modern age of scientific discovery continues to demonstrate more and more clearly that the religious explanations for reality are incorrect and irrelevant. This dismantling of religious "truth" understandably evokes a harsh reaction by the religious, as many reject scientific knowledge as unsound or blasphemous. Perhaps the best-known example of this unfortunate self-imposed ignorance is the rejection of global warming by those who feel that God's dominion over the universe and our planet rules out any possibility of human caused climate change. Representative John Shimkus (R-IL), who is the Chairman of the House Subcommittee on Environment and Economy, said that humankind "shouldn't be concerned about the planet being destroyed because God promised Noah it wouldn't happen again after the great flood."

The problem with the anti-intellectualism shown by the religious community is that it prevents us from addressing suffering that could be alleviated through scientific progress and government intervention. Unfortunately, many of those who believe in divine truth or a divine plan reject attempts by human beings to control their own future, which limits our ability to combat harmful aspects of society and government. For example, a recent study done by Baylor University found that Americans who believe God has a plan for their lives are more likely to think the government "does too much," and are more likely to oppose unemployment benefits. Another example is stem cell research, which has the potential to treat Parkinson's disease, amyotrophic lateral sclerosis, spinal cord injury, burns, heart disease, diabetes, and arthritis, but is opposed by many religions as immoral and against the word of God. This type of thinking arises from the mentality that human beings should rely upon faith and prayer for solutions to their worldly problems, as God is the supposed arbiter of whether or not we suffer or live good lives.

This dependence upon supernatural solutions to worldly problems is an addiction our country needs to shake. Instead of praying for a better future, and rejecting attempts by the government to reduce suffering, humanists support efforts to critically analyze problems and potential solutions without the deference to religious dogma. It's time for society to give greater recognition to scientifically derived knowledge. 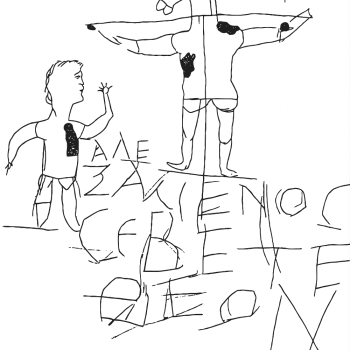 Being Sent for the Work of Justice (Part 3)
Herb Montgomery
Get Patheos Newsletters
Get the latest from Patheos by signing up for our newsletters. Try our 3 most popular, or select from our huge collection of unique and thought-provoking newsletters.
From time to time you will also receive Special Offers from our partners that help us make this content free for you. You can opt out of these offers at any time.
see our full list of newsletters
Editor's picks See all columnists